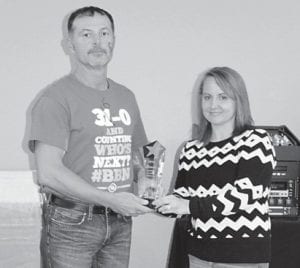 The theme for the night was “March Madness” and he wore a shirt his motherin law, Pearl Noble, bought for him after the University of Kentucky Wildcats went 31-0.

By the time the awards banquet was held, UK had won five more games so Holbrook crossed out the 31 and made it a 36 because his mother-in-law didn’t have time to mail another shirt.

Holbrook is the son of Corene Holbrook of Mayking and the late Eddie Holbrook, and his wife, Jennifer, is the daughter of Charles and Pearl Noble of Ermine.