By LOIS BARBER The Associated Press 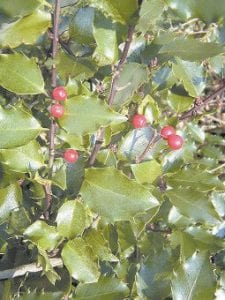 A female holly plant is seen in this photo. (AP Photo/ Lois Barber)

English holly (Ilex aquifolium) has been a symbol of Christmas for centuries in Europe.

Fashioned into wreaths, its spiny leaves and red berries symbolized a crown of thorns and drops of blood. Its green leaves and ability to produce fruit even in coldest winter evoked the promise of everlasting life.

When European settlers arrived in America, their Christmas tradition continued with American holly (Ilex opaca), which grows all along the East Coast, from Florida to Maine.

Holly at Christmastime became so popular in the early 20th century that it spurred a rash of thefts from private landscapes and forests. Holly trees were cut down and removed, and fashioned into decorations that were sold. Maryland and Delaware passed laws prohibiting the sale of fresh holly in an effort to stop the vandalism and preserve the natural landscape.

Long before the settlers found a decorative use for holly, Native Americans brewed tea made of holly leaves to treat coughs. The berries were used for buttons or left for animal consumption.

They are an important source of winter food for many birds, although they are toxic to humans.

Hollies are slow growers but can eventually reach a height of 40 to 50 feet, with a spread of 18 to 30 feet.

They require both male and female plants to produce berries. While both produce creamy white flowers in late spring, only the females produce fruit. One male plant is required for pollinating up to eight female trees. A ratio of 1:3 male to female trees is about the optimum number for pollination and production of berries.

Hollies like full sun and acidic soil with a pH of 3.5 to 6. They will tolerate partial shade, but may develop leaf spot diseases and produce fewer berries.

Unpruned, their natural form is a pleasing pyramidal shape, but if you must prune, note that berries appear on the current year’s growth. Pruning is best done in December; pruning after flowers form in the spring will mean fewer berries.

The Romans gave boughs of hollies to friends during the Festival of Saturn, the winter solstice holiday celebrated in late December. It was meant to bring protection and good luck.

The Druids believed that hollies represented foresight: facing hardships or sacrifices now for something better in the future.