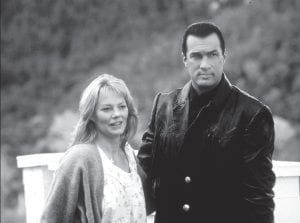 Actors Marg Helgenberger and Steven Segal in a scene from the film “Fire Down Below.”

Nearly 20 years ago, on August 28, 1996, The Mountain Eagle carried the news of the Letcher Fiscal Court’s vote to allow the producers of “Fire Down Below” to use a county-owned tipple site located at the mouth of Cowan Creek as a prop for the movie, starring Steven Segal, Marg Helgenberger, Kris Kristofferson, and Harry Dean Stanton.

Following is part of the official description of the movie, which was also filmed in Perry County:

“The sleepy appearance of an Appalachian coalmining community belies the presence of a sinister toxic waste-dumping scheme that is poisoning local plant and animal life as well as area residents. The murder of an Environmental Protection Agency investigator leads officials to assign Jack Taggart (Steven Segal) to go undercover as a handyman working through a relief mission. It doesn’t take him long to discover that the mastermind of the dumping is local businessman Orin Hanner (Kris Kristofferson). Along the way, Taggart falls for the mysterious Sarah Kellogg (Marg Helgenberger), a young woman ostracized for a sordid past and a father who died under suspicious circumstances while working for Hanner. When Taggart’s undercover work proves ineffective, he provokes a direct confrontation with the villain and his henchmen that results in plenty of Segal’s trademark martial arts action. In addition to kicking the stuffing out of bad guys, Segal demonstrates a real knack for playing bluegrass guitar.”