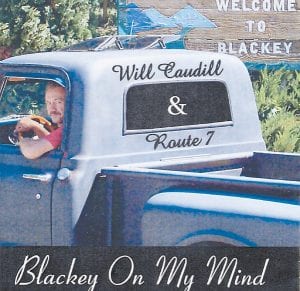 The cover of “Blackey on My Mind” is seen in this photo.

A Blackey man has written 10 songs inspired by living in Letcher County and has titled his first album “Blackey on My Mind.”

William Caudill, who named his band Will Caudill & Route 7, describes his music as “traditional bluegrass with a little touch of country.

Caudill, 49, said most of his songs are about his mountain heritage.

“ I always try to make sure to tell a complete story within three verses of a song such as the song ‘Blackey On My Mind’,” said Caudill, who is a custodian at the Letcher County Area Technology Center. “I recall working for Joe Begley and sitting on the porch talking with him, Hayed Burns and Gene Back. Joe Begley was the type of person people respected whether they agreed with him or not.”

Begley and his wife, Gaynell, were the owners of the C.B. Caudill Store in Blackey.

“ He was an icon of Blackey and eastern Kentucky,” said Caudill. “Some of my fondest memories include working around the C.B. Caudill Store for him, therefore, making the writing of that particular song that much more special to me.”

He said the song “Blackey On My Mind” is about a man having to move north to find a job, but Blackey remains in his heart no matter how long he has been away from Letcher County.

“People who have had to move away from this area to make a living can relate to it,” said Caudill. “Once people have heard my songs I want them to feel like they have learned something the way they would have if they have read a book.”

Caudill was born and reared in the hollow where he still lives. It was originally named Lower Caudill’s Branch but was later changed to Old Dixon Road because of the E-911 system .

His father served in World War II and later became a self-employed farmer. Caudill has 10 siblings. His sister, Lenora Dixon, died of brain cancer two years ago. He dedicated the CD to her and included a photo of her on the back of the cover.

More than 500 copies have been sold.

Caudill has played his music at Campbell’s Branch and Kingdom Come community centers. He performed at Blackey Days last year as well as at an American Cancer Society Relay for Life fund-raiser at the Blackey Senior Citizens Center.

Musicians who helped with the project include Fred Campbell on banjo, Alice Campbell sang tenor, John Vandiver played mandolin and did harmony vocals on one song, David Barnett played banjo on three tracks, Paul Smith played fiddle and Clyde Stanley played bass on all the tracks and recorded the CD.

Troy Bentley made the album cover.