Home monitors being urged for those with high blood pressure 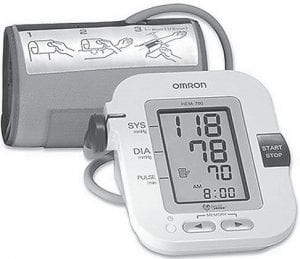 Home blood pressure monitors like this one from Omron are available at most pharmacies and many retail stores.

Everyone with high blood pressure – some 72 million Americans – should own a home monitor and do regular pressure checks, the American Heart Association and other groups are now urging in an unprecedented endorsement of a medical device for consumers.

High blood pressure is a leading cause of heart attacks, strokes and death. Having it checked a few times a year in a doctor’s office or at the drugstore is not enough to keep tabs on it, and regular home monitoring is more accurate, the new advice says.

Closer checks would let doctors fine-tune the many medicines used to control high blood pressure, just as diabetics adjust their insulin levels by regularly monitoring blood sugar. Only a third of people with high blood pressure now have it under control.

“We need new approaches. Our current approach is simply not working,” said Dr. David Goff, a preventive medicine specialist at Wake Forest University and a member of the panel that wrote the advice.

Outside experts strongly agreed. But some said the case would be more compelling if those pushing the monitors had no industry ties. For example, a leading device maker pays more than $300,000 a year to co-sponsor the heart association’s blood pressure Web site. The company played no role in the new advice, the association said.

“This is not as clean a recommendation as it could be” because of the industry ties, said Dr. Sidney Wolfe of the consumer group Public Citizen. Still, home monitors are “an excellent idea,” Wolfe said.

They cost $50 to $100 on the Internet and at pharmacies. Insurance usually doesn’t pay, though the heart groups say it should.

The heart association, the American Society of Hypertension and the Preventive Cardiovascular Nurses’ Association all urged home monitoring in a statement published online May 22 in the journal Hypertension, the medical word for high blood pressure.

The condition occurs when blood pulses too forcefully through vessels, which can damage the heart, kidneys and other organs. It is more common as people age, and it leads to hundreds of thousands of deaths each year.

Readings of 140 over 90 are considered high at the doctor’s office; 135 over 85 if taken at home. Pressure often goes up with the “white coat” effect, nervousness when seeing a doctor. Readings also vary throughout the day.

“So often we rely on a single measurement in the office and it’s so arbitrary,” said Dr. Allen Taylor of Walter Reed Army Medical Center, a prominent researcher not involved in the new advice.

Many types of medicines can help control high blood pressure, and often more than one is needed. Finding the right dose or combo is tricky.

Home monitors can help, by giving a better picture of pressure variations and the response to a drug. Sometimes less medication is needed, because doctors discover that pressure was artificially high when someone was in the office, Goff said. That spares people the cost and side effects of unnecessary treatment.

Often, though, the opposite is true – people need more or different drugs.

Home monitors are especially important for the elderly, pregnant women, diabetics and people with kidney disease, the panel said. Automated, arm-cuff devices are recommended – wrist and finger ones are notoriously inaccurate. People should take their device with them to their doctor’s office and have measurements compared to make sure the machine isn’t off.

Experts suggest taking two or three readings at a time, one minute apart, while sitting with the arm supported. Readings should be taken at the same time each day, such as morning and evening, for a week.

Twelve readings are recommended for doctors to make treatment decisions, and this can be repeated as often as a doctor feels necessary, depending on how stable the condition is.

“It’s a great idea,” said Dr. Joseph Drozda of St. John’s Mercy Medical Center in Chesterfield, Mo. He is a high blood pressure expert for the American College of Cardiology. “If you’re graphically seeing where your blood pressure is all the time, it keeps it real to you,” especially if you’re not having symptoms, he said.

However, there is scant proof that home monitoring will cut heart attacks, strokes or deaths more than periodic office checkups do. Studies suggest that home monitors can improve blood pressure control, and that a 2-point drop in the reading results in a 4 percent drop in heart disease death rates, Goff said.

Many blood pressure drugs have been approved without evidence they lower deaths, said Dr. William White, a blood pressure specialist at the University of Connecticut and a reviewer of the new advice.

“We don’t have direct evidence that it will reduce heart attacks and strokes but we have reason to believe that it will,” said heart association president Dr. Daniel Jones, dean of the University of Mississippi School of Medicine.

Industry ties also should not make the public doubt the advice, Jones said. A leading home monitor maker – Omron Healthcare Inc. of Deerfield, Ill. – is one of three sponsors of the association’s high blood pressure Web site (the other two are drug makers).

Device makers also help sponsor projects and meetings of the hypertension society. The head of the panel urging home monitors, Dr. Thomas Pickering of Columbia University, is a paid speaker for Omron, and his university has had research grants from Omron and another device maker, Microlife.

The panel did not endorse specific machines.