Homebuyers say they were victims of scam 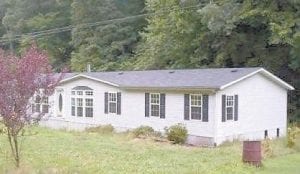 Pictured above is the double-wide mobile home Bill and Sue Harvey thought they had purchased, but later found out had been sold to another person as well. The couple eventually got their money back.

Carolyn Sturgill remembers the day she and her sister-in-law, Sue Harvey, thought they were talking to movers they had hired to transport a double-wide mobile home from Magoffin County to Cowan.

One half of the mobile home was being prepared to move onto the highway last September 15. Sturgill said about 30 minutes into a conversation with a mover she finally realized that she hadn’t hired that particular moving company.

“It got very heated,” said Sturgill. “Mr. Blankenship was as convinced as we were that he owned it.”

“All (Blankenship) had were canceled checks to Todd McCarty,” said Sturgill.

Sturgill said Blankenship was supposed to leave the other half of the mobile home sitting in Magoffin County until the ownership question could be settled in court.

About a week after Sturgill and Sue Harvey found out they weren’t the only ones who had purchased the mobile home, they were driving around looking for the first half of the structure when they passed the second half being hauled away.

“To pass it on the (highway) was pretty bizarre,” said Sturgill. “He just took it.”

Sturgill said the double-wide mobile home hasn’t been occupied and doesn’t have electricity hooked up to it. She drove to Phelps recently to see if it was still there and it was.

Sturgill said she wrote a letter to Vanderbilt Mortgage shortly after she met Blankenship. Vanderbilt returned the $35,000 the Harveys paid for the mobile home and also reimbursed them $8,164.17 in expenses they encountered while trying to acquire it.

“In our situation we just got caught up in a scam, but we did everything right,” said Sturgill.

Sturgill said she knew nothing about McCarty until the day she met Blankenship, when Blankenship claimed to have bought the same home from McCarty.

“He (McCarty) would post signs on the interstate and in busy shopping centers ‘used mobile home for sale,'” said Sturgill. “He evidently was making pretty good money.”

Brian and Ruthie Baker of Deane saw one of McCarty’s signs posted near the Hazard Wal-Mart advertising mobile homes in October 2008.

“I called this guy and we negotiated a price,” said Baker. “He told me he was a mobile home mortgage broker and said he sold homes for Vanderbilt Mortgage.”

Baker said he looked at McCarty’s mobile home broker license before he and his wife looked at a mobile home at Jackhorn. Baker told McCarty the home needed work. Baker paid back rent of $500 for the lot on which the home was located, sent McCarty $750 by wire, then met McCarty in Campton and gave him $6,250 in cash.

“He wrote me a bill of sale and receipt and said it would take two or three weeks for Vanderbilt Mortgage to send a title,” said Baker.

Baker said the man who moved the mobile home told him that he had been hired by the Harveys to move a mobile home in Magoffin County, but that half of the home had been moved by someone else who claimed ownership.

Baker said he became leery and called Vanderbilt Mortgage and asked if his purchase was legitimate. He was told that McCarty had not yet paid for the mobile home and that Baker could either pay the company $5,700 or report the home as stolen.

“I worried myself sick,” said Baker. “I was so sick at my stomach that I didn’t eat for a week.”

Baker recently learned that Vanderbilt Mortgage has agreed to give him a title to the mobile home. Baker said that once he gets the title in hand, he and his wife will finally move into the home.

“To be honest, I was afraid to move into it,” said Baker. “It’s just been sitting there six or seven months. I wouldn’t buy anything from a mobile home broker again.”

Baker said he doesn’t think he would have gotten a title if it wasn’t for the involvement of Banks, the sheriff’s department, and Kentucky State Police Trooper Ben Campbell.

Melinda and Billy Stanley, of Jenkins, also saw a sign beside the highway advertising used mobile homes. Melinda Stanley said she and her husband paid McCarty $20,300. She said they gave McCarty $300 in cash at their home and then gave $20,000 cash to McCarty’s brother at Community Trust Bank in Whitesburg.

Stanley said she and her husband changed their minds about buying the home after McCarty told the Stanleys they would have to pay an additional $10,000 to move the structure from Deane to Jenkins. The Stanleys decided that was too much and demanded their money back.

Stanley said McCarty initially made payments of $200 to $300 to them but then stopped.

Banks contacted the Kentucky Attorney General’s office about the complaints he was getting about Vanderbilt Mortgage and McCarty.

The Kentucky Department of Financial Institutions (DFI) reviewed the allegations. Andrea Cubert, consumer complaints investigator, said that Vanderbilt Mortgage has taken adequate measures to resolve the complaints presented by the Harveys, Sturgill and Baker. In a letter written to Banks on May 5, Cubert said DFI is closing its investigation.

“In most instances, VMF was aware that McCarty intended to sell the home to another third party, presumably for a profit,” wrote Fulks. “Since October 2008, VMF no longer sells homes to McCarty under any circumstances.”

Eugene Slone, victims advocate for the Letcher County Sheriff’s Department, is also investigating the complaints. He said no arrests have been made. Anyone with knowledge of a similar situation involving the resale of mobile homes is asked to call Slone at 633-2293.