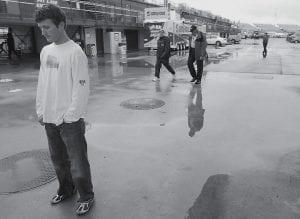 ANOTHER RAIN DELAY – NASCAR driver Kasey Kahne, left, stood in the garage area in the rain at Michigan International Speedway in Brooklyn, Mich., on Monday. The NASCAR Nextel Cup 3M Performance 400 which was first postponed due to rain on Sunday was rescheduled for yesterday (Tuesday). (AP Photo/Paul Sancya)

You hear it all the time during a Nextel Cup broadcast on both TV and radio about how this track or that track is a particular driver’s home track. Now, that driver may not have much of a history with his so-called home track but because of geographical concerns centering around his place of residence, a visit back to that track is treated as a homecoming of sorts for him and his team.

We can say the same thing about this weekend’s stop on the schedule at Bristol Motor Speedway. While not everyone that reads this article has walked up the hill at BMS to enjoy what many in the sport consider the best venue on the schedule, it is the closest to us and therefore we will claim the “world’s fastest half-mile” as our own.

This weekend we will not be the only ones claiming Bristol as their own track as the Tennessee facility will play host to around 160,000 fans on Saturday night when the green flag waves to begin the Sharpie 500.

This race is the toughest ticket on the schedule to come by and was recently named by ESPN as one of the top-10 sporting events in the United States, ranking it right up there with the Super Bowl, World Series and The Masters. 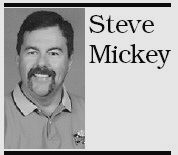 This Saturday’s race will be the 30th night race at the track as the lights were turned on for the first time back on August 26, 1978. The only change made to the racing surface since then took place 15 years ago when the old asphalt track was replaced with an all-concrete surface. The concrete never did provide a second groove of racing as recent races became more of a follow the-leader type of race instead of the old side-by-side banging that made Bristol famous.

Before this past spring’s race, a track official took me around the track for a closer examination and to my surprise the concrete surface was showing some major signs of wear and tear. In some spots you could actually see the rebar and it was obvious that the track’s surface was in need of repair.

The day following the spring race, crews began removing the old concrete in preparation for a new surface that would feature variable banking. This new shape would actually create a bowl-shape that designers believe will eventually create a second groove of racing which will return the side-by-side racing on which the track built its reputation.

The Busch Series held a test on the new surface recently and while each driver was quick to speak of his love for the “old” Bristol, each said the new surface should provide a better show for the fans while making the racing more competitive on the track. That should make the racing this weekend even better as the fight for the last couple of spots to make the Chase is going to go down to the wire in a couple of weeks at Richmond.

Since we spoke of the Busch Series test session, it should be noted that this Friday’s Busch Series race will be the 17th consecutive Busch race at the track that has sold over 100,000 tickets. The racing is just as good as what you will see on Saturday as the field for this race takes on even more of a Cup flavor. Besides the usual Cup drivers doing double duty, there will be few more trying to make the starting field.

So there you have it, what I consider the best weekend of racing on the entire schedule. If you really want a long weekend, plan to hit Bristol on Wednesday and get the complete Bristol experience. The racing actually gets underway on Wednesday with a double header featuring the O’Reilly 200 Craftsman Truck Series event and the 150-lap Hooters Pro Cup Series race. Don’t think Thursday is an off day. The 20th anniversary of Race Night will take place in downtown Bristol that day followed by the parade of the Cup Haulers that night that ends at the speedway.