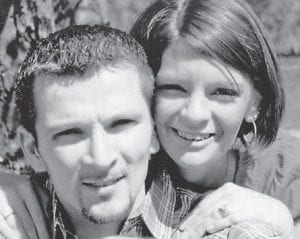 NEWLYWEDS — Kelli Lucas and Jason Pease were married July 11 at the home of the bride’s parents. Whitesburg correspondent Oma Hatton says, “It was a beautiful wedding in the yard, which was decorated beautifully. A very large crowd attended.”

Hello everyone, hope you are all doing well. The weather is nice. We are having periods of rain; that keeps it cooler. I like that.

My sister, Betty Tyree, and I visited our cousins, Glen and Dorthy Miles, and had the best time. I love visiting them. I love all the work they have done on their place, inside and out, did most of it themselves. They had their grandchildren there, Gary and Brenda’s, and also Paul David’s and Rona’s. They were sure enjoying them. The kids were having a ball. Dorthy made us some delicious rhubarb cobbler. I never liked it before. Mine was never good.

We had the best homecoming I’ve ever seen at our church. We had large crowds and wonderful preaching and singing. We really appreciated everyone who came from Ashland, London, and Hazard and other places, and also our home folks. Our pastor, Bro. John Conn, wanted me to tell everyone how glad we were to see them and we welcome them back.

I attended the wedding of Kelli Lucas, daughter of Tim Lucas and Kim (Pennington) Lucas, and the groom Jason Pease. I don’t know his parents’ names, I think his mother is Sherry Pease. It was so nice getting to see all the people. I hadn’t seen Betty Pease in a long time and I’m always glad to see Doug and Janie Benton. Me and Janie can always find lots to talk about. 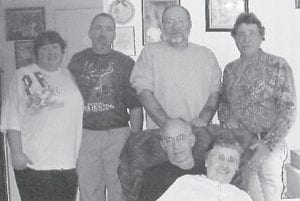 KING FAMILY — Pictured with Ada Miller King and the late Arthur King are their children, Anita, Rick, Art and Jim. The photograph was taken on Thanksgiving Day in 2008, the first time all the Kings’ children had been at their home in Miamisburg, Ohio, at the same time.

It was good talking to Ellis Caudill of Lexington a few days ago. He called to tell me who the ladies were that visited my granddaughter, Angie (Hatton) Mullins, who lived on that farm in the 1900’s. It was Fred and Minnie Halcomb and their daughters were Reva and Vernie. I knew Vernie when she was married to the late Arlie Caudill, who lived in Graveyard Hollow, now called Westwood. They were the parents of Sheila Caudill Swisher and Janice Caudill Cornett, wife of Jim Cornett. I also knew Ellis. He is the son of the late Willis and Evelyn Caudill, who lived just up the road from me. He had a brother, the late Rodney Caudill.

I knew Ellis’s wife, Ruby (Adkins) Caudill. Her parents were the late Sherman and Minnie Adkins. She has a brother, Willard Adkins, whose wife Elizabeth passed away recently. Sherman Adkins and the late Bill Long (game warden) were the ones who started my husband Clyde fox hunting when he was 16 years old and he hunted until he was in his 80s and was unable to hunt anymore. He loved that more than anything.

I talked with Roberta Willie and also Anna Watkins in Florida. They were both doing OK. I love hearing from my old Marlowe friends.

I also got a letter and a picture from Ada (Miller) King, another good friend from Marlowe.

I went to a birthday party for my pretty little greatgranddaughter, Ellie Mullins, at the Knott County City Park. it was a great party. She is the daughter of Angie and Rich Mullins. It was good seeing little Anna Hatton, daughter of Julie and Jamie Hatton. She is a little doll and so is Ellie. All my grandchildren are good looking and smart also.

My sister, Louise Shepherd, and I went to Carr Creek Lake on Thursday and made arrangements for our Howard family reunion at the same place we had it last year. It’s the Dogwood Shelter. All you Howards and friends, write it in your calendar. It’s Sept. 26 on a Saturday. Hope all of you can make it.

Hello, Shirley Wells of Clarksville, Tenn. Thanks for the picture. I’ll put it in the paper next week. You sure don’t have to thank me for being so nice and friendly and making you and your sister Minnie so welcome. It was my pleasure. I was so glad to see you. Come back any time.

Well, I’m tired of writing and I’m sure you are tired of reading, so I’ll say good night and God bless you. Try to be in church somewhere this week. You will be glad you went.