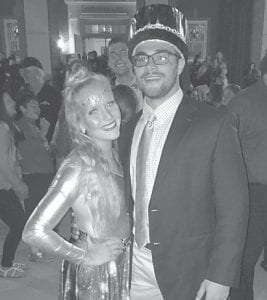 — Keaston Hall, son of Jerry and Tewanna Hall of Thornton, was selected as Georgetown College’s Homecoming Prince during halftime of the Georgetown vs. Union football game on Oct. 17. Hall is a junior economics major with plans to attend law school after graduation. He has been named to the Dean’s List with a 4.0 grade point average for all semesters while attending Georgetown. Hall is a member of Alpha Lambda Chi Fraternity, serves as the fraternity’s Fraternal Educator, and was the fraternity’s Alumni Relations and Fundraising Chair last year. He is vice-president of the campus Republican Party, and worked as a tutor at Georgetown’s Academic/Writing Center. He is pictured with Ali Hall, daughter of Linda Rains and Richard Hall.