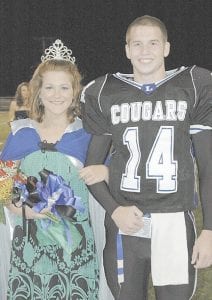 HOMECOMING QUEEN 2007 – Char-leigh Craft (left) was crowned as Letcher County Central High School’s homecoming queen on October 11 during half-time of a football game between the Letcher Central and East Ridge High School. Miss Craft, daughter of Harold and Judy Craft of Sandlick, was escorted by Charlie Banks, son of Steve and Tommie Banks, also of Sandlick. (Photo by Lonnie Sexton)