Lori Craft, 20, was the Grand Supreme overall winner of the Miss Black Gold pageant held Sept. 8 in Hazard. She also won Most Beautiful and Prettiest Hair. She will represent Hazard and the Black Gold Festival at the Kentucky State Festivals pageant in Lexington in November. She is the daughter of Mike and Tena Craft of Whitesburg, and is a graduate of Letcher County Central High School. She is a student at Southeast Kentucky Community and Technical College.

Since Bob and I, Don and Coreen Pridemore are all at Carter Caves State Parks as I write this, I’ll just get a little column in this week.

Our daughter Jessie and her husband Andy came up from Lexington and are staying here too. We came up on Sunday after leaving Blair Branch Church, and arrived about 3:30 p.m., had supper together at the lodge, and got a walk in before dark. We are staying until Tuesday evening.

Mary Jo Blair and Lillie Moss Hale are back home from their hospital stays in Lexington. Mary Jo had a knee replaced and Lillie Moss had a sick spell while staying with Anna Lou Blair. They both ended up in Cardinal Hill while there, and hopefully they are both on the mend. We have missed them the past few weeks.

We had a good weekend at the Blair Branch Church and a large crowd on Sunday. Sorry that Ellis Adams was a little weak, but glad he was able to make it out both days.

The Letcher Area Homemakers met last week for our September meeting. We tacked two quilts to donate to the Red Cross and had a good lunch also. 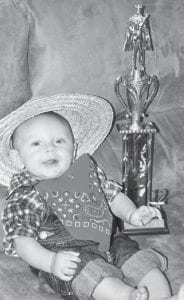 Four-month-old Braylen Liam Whitaker was first runner up in the Little Mr. Neon pageant. He is the son of Junie and Shequeenia Whitaker of Neon. His grandparents are Frona and Gary Moore of Neon, Teresa and Nelson Hopkins of Whitesburg, and Tammy and Johnny Whitaker of Hindman.

Hope Mattie Eldridge of Sandlick is still improving from her recent stroke. Matthew was at church and said she was coming home from the hospital this week.

My first grade teacher, Virginia Caudill of Carcassonne, also hasn’t been well and we hope she can feel better, as well as Jennette Adams, Van Blair and Wendell Calhoun.

Doreen wasn’t able to attend Homemakers last week because Wendell had been in Hazard Hospital.

Johnny Holbrook of Isom also has health problems, and we hope he feels better. He is such a character.’

It is so sad to lose such a young man and someone you have known ever since he was born and saw him grow up in the Jeremiah neighborhood.

Mike, Sharon, Ryan and Becky Ison were here for a few days during his death. Services were held at the Cedar Grove Church at Linefork. Our thoughts are with his wife Lenna and the girls and family.

We sang ‘Happy Birthday’ at church to Lois Blair on Saturday evening, and to Freddy Frazier’s wife. Then on Sunday to ‘Nikki’ Winstead, daughter of Delena and the late Billy Winstead. She left with whole handful of money that day, and we hope she buys something she really wanted with it.

Bonita and Jerry Adams had Lyndci and Sadie here visiting over the weekend. Bonita and Jerry and their grandson Noah Campbell camped out at the top of Blair Branch Friday night.

A birthday party was held Saturday for Luke Williams, who turned four. He had many family members there to help celebrate. When I left he was riding his batterypowered car he got on his first birthday, but they said when he opened his Batman outfit he was thrilled to death.

Little Isaiah and Derrick are really growing. I guess they are about 7 and 8 months old now.

Don, Coreen and I went to Somerset last Thursday to visit Mom’s sister, Juanita, and Vince McCrarey who are both not too well these days. We also went by the ‘country junk’ store to look for bargains.

This Sunday will be the memorial meeting for deceased members of the Dixon Memorial Church.

I saw where a section of Highway 7 South was named in honor of and in memory of the late Clayton Shepherd, who served in World War II.

Stella Elam was able to get out with Richard Smith and go to the cemetery, and Joyce Adams continues to improve from last week’s sick spell.

That’s it for now, sorry if I forgot things I was supposed to write, I’m just so forgetful.

This report on the Adams, Thompson and Blair reunion comes from Den and Judy and the Arthur and Helmer Adams family:

The 25th Adams, Thompson and Blair reunion was held at the Arthur and Helmer Adams Memorial Park located at 1138 Arthur Loop, Aug. 3 and 4.

Friday evening, a storm moved into Letcher County and dumped four inches of rain, washing Arthur Loop to where it was mostly impassable on the east end, but the south end of Arthur Loop was passable.

We canceled the church and the reunion for Friday night but by 6:30 p.m., 97 people had arrived for the reunion.

Pastor Ellis Adams got down on hands and knees in the mud and prayed for the people and for the reunion, but he didn’t have church.

I was personally touched when he got down in the mud and prayed with all of us, knowing that Ellis has cancer and he is 83 years old, but he loves the Lord Jesus so much the mud didn’t affect him.

Friday night, we had a lot of vegetable soup and soup beans, and lots of other foods, and we had a great reunion on the first night.

Late Friday night, County Judge Jim Ward stopped by at the reunion and told us he had been going all over the county and surveying the damage of the flood and wanted us to know that he and his men would get the road repaired on Saturday, but his main concern was getting the main roads repaired so folks could get in and out as their needs arise.

Saturday night, we had the reunion supper around 6 p.m. with those attending around 220 both nights, and we had lots of food brought in.

Arizona and Evangene sent several cookers of food but they were unable to attend. They are such dedicated people to their church and the people on the Branch.

The children’s washer toss tournament was won by Quentin Williams and Austin Whitaker for first place, Alex Whitaker and Kim Meade for second place, and Bailey Adams and Ricky Meade for third place.

May God bless everyone for coming and making this reunion another great one.

We would like to invite everyone to attend a picnic on Oct. 6, at the Arthur and Helmer Memorial Park starting at 10 a.m., and planning to eat around noon and staying all day. Bring a covered dish, drinks and lawn chairs. We will have a campfire later in the day.