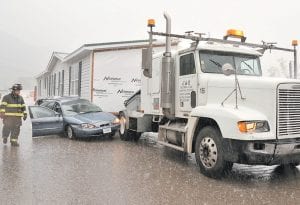 — Police say the driver of the Mercury station wagon seen in this photo suffered only minor injuries after the vehicle collided with the front half of a double-wide mobile home at Jenkins. The accident occurred April 19 at the intersection of U.S. 23 and KY 3086, just above Jenkins Middle High School. According to Jenkins City Police Officer Jim Stephens, the driver of the wagon pulled into the patch of the new mobile home as it was being towed down Pine Mountain. No other injuries were reported. (Photo by Chris Anderson)