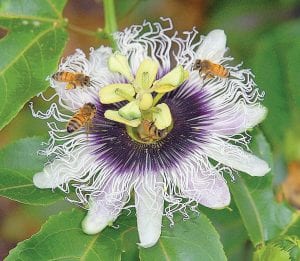 Honey bees gorged on a passion fruit flower pollen in Captain Cook, Hawaii, late last week. Breeders across that state are worried about the recent discovery on Oahu of the varroa mite, according to Gus Rouse, president of Kona Queen Hawaii, one of the largest queen bee breeders in the world. The mites feed on the blood of honey bee adults, larvae and pupae. (AP Photo/HO/Ken Love)

Fact: Commercial migratory beekeepers in North America are suffering significant hive losses for a variety of reasons. Fiction: The losses are not caused by cell phones, cell phone towers or cannibalistic bees, and the decline does not spell the end of civilization within four years, said Kentucky State University apiarist Tom Webster. Fact: a honeybee decline will impact agriculture. Fiction: the impact will not wipe out agriculture.

“When we have a tough problem that is difficult to solve and takes time to solve, it seems to create an information void,” Webster said. “People feel a need to start filling in that void, and all sorts of unfounded ideas start going around. We will see an impact from this decline; some commercial beekeepers have lost 90 percent of their hives. But, we do need to remember that honeybees are not native to North America and civilizations existed before the honeybee arrived.”

Webster believes that to understand what’s causing the honeybee decline, rumors and unfounded stories have to be put aside so facts can be the focus. Most beekeepers in Kentucky maintain a small number of hives and most of those are for honey production. Overall the state has around 5,000 colonies responsible for about 250,000 pounds of honey, according to the Kentucky Agricultural Statistics and Annual Report for 2005-2006.

Kentucky Department of Agriculture’s state apiarist Phil Craft said, before concluding that the deadouts (hives where bees have died) in Kentucky are due to a new disease or malady, it’s important to examine why beekeepers lose colonies in the winter. Kentucky’s beekeepers begin preparing their hives for winter as early at July of each year.

“There are three considerations that we keep in mind in helping a colony of honeybees get through the winter,” he said. “Bees must have sufficient food stores in the hive. In Kentucky that means a hive needs about 50 to 60 pounds of honey for the bees to feed on during the winter.”

Craft said a second consideration is that the minimum, latefall population required for a hive to make it through winter is about 25,000 to 30,000 bees.

“By spring, the number in the hive will be greatly reduced, and there is a natural decrease as older bees die,” he continued. “The bees cluster together and consume honey to keep warm when the temperature is below 55 degrees – the colder the outside temperature, the tighter the cluster. I always say that as the number of bees in a hive decreases, the hive may reach critical cluster size, below which the survival of the bees is unlikely.”

Craft said even in a diseaseand pest-free colony of bees with sufficient food and plenty of bees to cluster, half won’t survive until spring – only bees that develop in late fall will live that long.

“The third consideration is healthy bees,” he said. “Honeybees that have been weakened by mites or disease will die even sooner. If you don’t monitor and control mites and disease, you can’t tell whether bees are actually as healthy as they appear.”

The recent Easter freeze may also be a factor, as Craft noted that periods of warm weather, followed by cold weather are hard on bees. This situation happened in February and again in April.

“We often have these periods of warm and then cold and then warm again in Kentucky. When it gets warm, bees become more active, consume more honey and then they have to recluster during the next cold snap,” Craft said. “The result is dead bees in multiple small clusters. These days we consider a winter loss of 20 to 25 percent acceptable. Unfortunately it’s common to lose one or two hives, which means that beekeepers with only a few hives can lose all or most of their bees.”

Craft said beekeepers with larger numbers of hives usually make plans in the spring to replace lost colonies by making divides or purchasing package bees. Still, Craft said that these losses are much lower than in feral, or wild, colonies where as much as 75 percent of first-year honeybee colonies fail to survive winter.

“The difference between the high losses in nature and in our managed colonies is good beekeeper management and good preparation of hives in winter,” Craft said. “Unfortunately last year’s honey flow made preparation especially difficult for Kentucky beekeepers, and that’s why beekeepers who failed to feed their bees heavily in the fall may find starved bees this spring.”

So aside from normal winter losses, complicated by poor honey flow and the topsyturvy, hot-cold pattern of late winter and early spring, what is causing the above average population decline?

Webster and Craft agree the reasons for the decline are many and haven’t completely been determined. Colony Collapse Disorder may explain some losses that were not winter losses and which have occurred during periods when bees were still raising brood.

“This phenomenon, called CCD for short, has received a lot of media attention,” Craft said. “While earlier reports said only migratory beekeepers with large operations were affected, some smaller keepers have reported losses as well – some as great as 50 percent. Losses from CCD are now being reported in about 25 states, but CCD may or may not have been a real factor in all of these cases.”

Craft said that reports from some large beekeeping operations in Georgia, which provide a lot of package bees to Kentucky every spring, state that Georgia hives are thriving.

“I believe that losses reported here in Kentucky seem to be more related to starvation and poor condition of bees than to CCD,” Craft said.

Webster said that several pathogens and pests, some of which are familiar to Kentucky beekeepers, could be a factor in the decline. He believes nutrition could play a part as well.

“For example, if all the plants other than the crop to be pollinated have been treated with an herbicide, that could be hurting the bee population,” he said. “It’s akin to living off of only grilled-cheese sandwiches. What I’m trying to say is bees need a variety of nutrition sources.”

Some national attention recently has been paid to the finding of a new species closely related to a disease that has long-plagued U.S. beekeepers – Nosema apis. Webster confirmed that this new species of Nosema has been found in hives in Florida, Kentucky and several other states. A laboratory diagnosis is the only way to determine Nosema’s presence.

“We’d most likely harvest fewer cantaloupes, watermelons, cucumbers, pumpkins and squash, which would be smaller and could be misshapen,” Strang said. “Some fruit trees might not set as much fruit without honeybees, but it’s not going to wipe us out. The recent Easter freeze was much more devastating to our growers than the bee situation.”

Strang emphasized that other pollinators help the honeybees out.

“We have a lot of native bees and bumblebees that do a great job pollinating,” he said. “We haven’t always had honeybees to do the work, but we depend on honeybees to do a lot of pollination in a short period of time, when we have a large number of crop flowers to pollinate.”

So what can beekeepers do to protect their hives? Webster said to avoid putting hives near places where agricultural chemicals are heavily used; give bees diverse food sources; keep well-known parasites under control and, for unexplained problems, send small bee samples to the KSU lab for analysis.

Craft said one of the healthiest things beekeepers can do for their hives is to cull older brood comb. He believes it’s one of the best things beekeepers can do to promote a healthy environment in their hives. He also recommended treating all hives with the antibiotic fumalgillin because the new strain of Nosema, as well as the old strain, responds well to treatment.

“This antibiotic is available from all beekeeping supply companies,” Craft added. “Add one teaspoon of fumalgillin to each of the first two gallons of sugar syrup fed to each colony.”

Beekeepers interested in sending small bee samples to Webster’s lab at KSU should first contact him to make sure they collect the sample in a way that will provide the most accurate results.