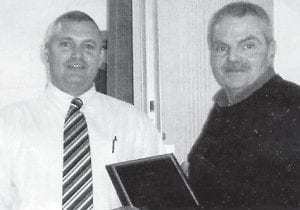 Stephen Reed Frazier, who teaches eight-grade math and algebra at Hindman Elementary School, received a plaque of gratitude from Hazard State Police Post 13 for his service to and support of the Kentucky State Police. The plaque was presented to Frazier at a surprise dinner, where he also received a Honorary Kentucky State Police Commissioner’s Staff, Colonel Aide de Camp award. Pictured with him is KSP Lt. Claude Little, who presented the award.