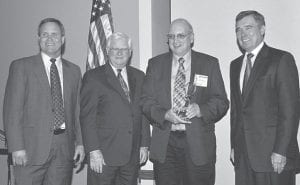 Letcher County Sheriff Danny Webb is a recipient of Operation UNITE’s Rising Above Award for inspiring leadership in law enforcement. The award was presented by White House Director for Drug Policy Gil Kerlikowske and Rep. Harold ‘Hal’ Rogers. Webb was a member of the Kentucky State Police for 30 years, rising to the rank of captain, before becoming sheriff of Letcher County. He also is a Vietnam War veteran of the U.S. Army, and was awarded the Bronze Star. Now in his third term as sheriff, Webb is an executive board member of Appalachian HIDTA and co-chairman of the Letcher County UNITE Coalition. Pictured are (left to right) UNITE Law Enforcement Director Dan Smoot, Rogers, Webb and Kerlikowske.