Hooray for Bam, but where’s Booker? 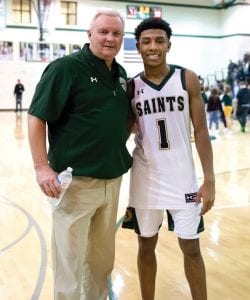 It was really nice to see former UK player Bam Adebayo of the Miami Heat named to the NBA All- Star Game as a reserve. However, it’s perplexing how Phoenix guard Devin Booker, another former Cat, was left off the team.

He was averaging 27 points, 6.4 rebounds and 4.1 rebounds per game and shooting 51 percent overall from the field and 37 percent from 3-point range at the time of his All-Star snub.

Gerald Bourguet, editor/writer FanSideNBA, noted that the only other players in NBA history to average 27 points and six assists per game while shooting 50 percent from the field are LeBron James, Michael Jordan, Larry Bird, Steph Curry and Oscar Robertson — five of the best players ever to play in the NBA.

“The NBA is different than the game I fell in love with at the beginning… all the best players being in the All-Star Game. Now it’s an entertainment, drama, political filled league,” Booker said.

Still, it’s hard to see how Booker could be left on the All-Star roster especially when players with far lesser numbers were picked.

If there is one thing that stands out about Kentucky point guard recruiting target Kennedy Chandler it would be his speed with the ball.

“Whether he is in transition or getting a head of steam up in the half court off a ball screen, he can fly,” said Briarcrest Christian (Memphis) coach John Harrington about his 6-1 point guard. “He can really pass the ball, especially to 7-footers or 6-10 kids who like lobs that lead to dunks. He’s very gifted at that but he’s also gifted scoring baskets around the rim with his body. He uses angles and English with the ball very well.”

That sounds similar to how former Wildcat Shai Gilgeous- Alexander managed to score inside against bigger players in high school and college and has continued to do in the NBA.

“Kennedy works on all types of moves whether it is with his left hand, right hand, floaters. He practices all kind of shots,” Harrington said. “He’s very competitive, too. During open gym before the season started I would always put him on the worst team with four knuckleheads for pickup games. Then he would make sure you knew his team had won three or four games in a row any way.

“Kennedy has grown a lot physically in the last year. When he was a sophomore he was not really dunking the ball a lot. Now he’s driving and making some spectacular dunks. I think he’ll just keeping getting bigger and stronger, too.”

“I think every kid enjoys recruiting at first but when you are a high profile player with social media being the way it is, everything you do is scrutinized and watched. When he got down to 10 schools, school 11 was not happy,” Harrington said. “There has been some criticism and comparing him to other point guards and saying he’s not as good. I just told him when you are really good, you are just on an island by yourself with everything aiming for you.”

Despite facing a lot of gimmick defenses, Chandler has still averaged about 23 points, four assists and four rebounds per game. His team has four Division I football commits, so Chandler also plays a lot of minutes because he’s the team most skilled basketball player.

Harrington admits that Chandler doesn’t fit the size mold of the prototypical point guard that John Calipari has had at Kentucky where most have been in the 6-4 range.

“But the one thing Kennedy has is the unique ability to get away from people because he is so fast,” Harrington said. “The team I would actually see him fitting in best with would be North Carolina because they get the ball out of the net, throw it to the point guard and take off. That’s when he’s at his best.”

Harrington, who is the school’s vice principal and basketball coach, does see one favorable trend for Kentucky.

“I think Cal coaches more like I coach Kennedy, getting on to him and holding him accountable,” Harrington said. “If the team messes up usually Cal will get very animated with the point guard. He and are I lot alike.”

Harrington watched a lot of Calipari’s practices when Calipari was head coach at Memphis — Calipari’s daughter, Megan, was a student worker in Harrington’s office and Calipari’s son, Brad, attended middle school there.

“I have told Kennedy that he (Calipari) knows how to get him prepared for the next level (NBA),” Harrington said. “I also told him that Cal or any coach will be patting him on the back now but after he graduates they will have you on scholarship and will wear you out coaching you.”

Obviously hometown Memphis — and coach Penny Hardaway, a former NBA star — has recruited Chandler heavily. Chandler said at the Marshall County Hoopfest in December that he knew many were assuming he would go to Memphis but insisted then he was not close to a college decision and was “wide open” about where he would go.

“Memphis always has great talent but what Penny is doing is creating a national program where he can go and get some players across the country. He does not have to depend just on Memphis for players,” Harrington said. “Cal did not have a lot of Memphis kids on his team and I know why. He did not recruit Memphis players unless they were special.”

Harrington said he has known Chandler since “he was just a little knucklehead” playing with son in third grade at Briarcrest.

“I got to see him grow and develop into a special player,” the coach said. “He has always played up a grade or two because he had so much potential. He and his mom and dad talked about him being a leader and the intangibles of how to be a good leader for teammates. They take it serious. It’s a process they know for next year at Briarcrest and then however many years in college and Lord willing then he might make a future out of it.”

Kentucky offensive tackle Landon Young doesn’t think he does enough to help others and wishes he had time to do even more. Cambridge Place Nursing and Rehabilitation employees and residents feel differently.

That’s why the Lexington facility dedicated its dining hall in his honor during its annual pre-Super Bowl party last week and named it the “Landon Young Dining Hall” because of all he’s done at the facility.

“It is amazing that they did that,” Young, who was named captain of the Allstate AFCA Good Works Team for his community service, said. “I want to spend more time out there. It is a blessing they think enough of me and did this for me. I really appreciate what they did and it means so much.

“My parents tried to raise me the way their parents raised them. Part of why I try to do so much is a fear of not wanting to disappoint my parents. I know they wouldn’t want me to feel that way but I just want to give back. I am so blessed and there’s no reason for me not to give back a lot.”

Young just thought he was coming to Cambridge Place for the annual Super Bowl event.

“I had no clue what they were doing. They definitely surprised me,” Young said.

Kentucky signee John Young admits that UK offensive lineman Logan Stenberg is a player he has looked up to but he’s not sure everyone appreciates him being described as a “nasty” player on the field similar to Stenberg.

“I am not sure my mom would describe me that way because I am different at home than I am on the field,” Young, an all-state lineman at Christian Academy of Louisville, said. “Growing up I wanted to play basketball and she would get mad because I was pushing people down. She was happy when I started playing football and because it was legal to knock people down then.”

Young is now enrolled at UK — he’s rooming with quarterback Beau Allen — and ready to compete this spring in hopes of showing he could play next season.

“The redshirt thing will take care of itself. We are all here to compete. That’s why you pick the SEC,” Young said. “I am definitely going to compete. I am not opposed to a redshirt year. I could play four games and still redshirt, so that would be fine with me if that’s how it turns out.”

“I want to watch and see how they do business and learn from that,” Young said.

However, the big reason he came to UK was offensive line coach John Schlarman.

“He is a good man and a guy you want to play for,” Young said. “He’s one big reason I originally committed to Kentucky. Everybody loves playing for him and I believe he can keep raising the bar for what the offensive line does. I want to be part of doing that for him and Kentucky.”

Former Kentucky running back Anthony White has worked and lived in Lexington since the end of his professional football career. One of his former teammates, Anwar Stewart, is the new defensive line coach at Kentucky.

White understood recruiting coordinator Vince Marrow’s decision to stay at Kentucky rather than continue to pursue the head coaching job at Youngstown State was a “fairly big deal” for UK because of the recruiting success the Cats have had under Marrow.

However, White admits he was not totally aware of just what Marrow means to many in the Lexington community.

“I was out with the Big Dog (Marrow) and Anwar and the question was asked to Vince if the money was good enough for Youngstown State to steal him,” White said. “He just smiled.

“Then a guy comes up and asks me and Anwar if we work there. We told him no and then he says, ‘Was that guy just here Vince Marrow?’

“I knew he was big for sports and recruiting but I’m learning Big Dog is really a big deal for this city. He’s a big name. There was a mom standing close to us when Vince was there and she said, ‘You can’t leave.’ A lot of people just love that guy so keeping him was big for recruiting but it’s also big because of all he means to this city.”