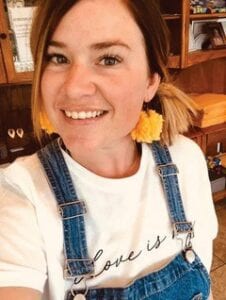 Jodi Gray Davidson shows off earrings that she made. She is a second grade teacher at Orin Academy, Cincinnati, Ohio. Jodi is the daughter of Clarence and Kay Gray, and is married to Carl Davidson. “Most importantly, I have the pleasure to call her my granddaughter,” says Southern Ohio correspondent Rose Ballard.

As I start writing this column, once again I look across the hayfield that shows only a tad bit of greenery. The trees on the hillside are barren, except three tall spruce trees that are showing their outstanding beauty that is always hidden during the spring, summer and fall.

There’s still a bit of greenery showing along the roadside, that looks like it is a border to the the green spruce trees. We’ve had some beautiful weather in November, then the temperature has dropped drastically. However for the next week it is predicted to be nice.

By the time some of you receive this edition of The Mountain Eagle, Thanksgiving will just be a memory! I hope it is a very happy one.

I’ve been told that I try to carry the world on my shoulders, and that is why I am so small.

At this time of year when so many are planning an elaborate meal, my thoughts and heart go out to not only the homeless, and to the people that can’t afford food except just the necessities to live.

Cincinnati has something called a Free Store where hundreds of people line up each Thanksgiving and Christmas to get boxes or bags of food. I have to admit there are times I wonder how many are in the line that will be out shopping on the Friday after Thanksgiving. I really hope there’s good food of some kind on every table.

As I have written several times, at this time of year my thoughts travel back in time of childhood when Wes Ison, who lived on Mill Branch, sold turkeys. Mr. Ison was a schoolteacher at Mill Branch Grade School who taught me four years. Somehow Mr. Ison decided to sell my dad a turkey, except there was only one small problem, Mommy had never made chicken and dressing, much less fix a turkey!

Mom didn’t know there was such a thing as a cookbook that even existed in those days, nor anything called a recipe.

Please don’t ask me to explain what I did next, as to this present time, I can’t find the answer that question?

Here I am, 11 years old, Amburgey’s grocery store was owned by Jr. and Bernice Adams as far back as I can remember as a child. I went to the store and asked Bernice to tell me how to fix this turkey.

Bernice had children of her own, I still remember to this day how kind she was to me. She found a recipe that she had saved from a newspaper called the Courier Journal, I think it was based out of Louisville.

Bernice copied the recipe down for me, meantime she got the ingredients, of course put them on Daddy’s “tab” credit, I headed back to the house to bake a turkey and dressing.

You must remember back then everyone used a wood and coal stove, with no way to control the temperature.

All I can say, if my mother was alive at this present time, Mommy would tell you that was the best turkey and dressing she ever ate.

Several years ago, I got in touch with the Courier Journal, telling them what I just wrote above, giving them approximately the year. In return they sent me a copy of the recipe that was in the newspaper which I still have someplace.

Having learned about something called a recipe sparked a fire in my heart, as I would read recipes like people would read a novel. As years passed when I got married, that love returned. In my possession I probably have close to a hundred cookbooks. I really have to fight the desire as I go to thrift stores, or especially when there’s a fundraiser, not to buy more cookbooks, as I have run out of room to put them.

Another favorite memory this time of year comes to mind.

During the long distance and lack of funds, there were so many times I wanted to be with my parents in the mountains of eastern Kentucky that I still call home.

In 1972 we managed to buy a new station wagon. We had a new baby also, and even though finances were better, we couldn’t travel.

The following Thanksgiving I started getting the longing to go home to be with my parents and brothers and sister.

Jack and I went to a local store, and we purchased everything I would need to fix for Thanksgiving dinner, including the turkey. We packed everything in the station wagon, heading for my parents in eastern Kentucky.

Thanksgiving morning I was up early to start fixing the turkey and trimmings. Everything was delicious, spending that special time with Mommy and Daddy for a holiday was wonderful.

There was turkey left. Mommy was afraid that no one would eat the leftovers, so again I packed the turkey and dressing, and we headed on our way back to Ohio. Instead of stopping to get something to eat, we ate leftover turkey on the way home.

Now something happened we didn’t expect. As the temperature dropped we were caught in a blinding snowstorm for what seemed like an eternity. Jack had to drive with the headlights on; it was broad daylight.

Silently I prayed for the safety of four small children, I promised God, if He would get us home safely, I would never put my children in danger like that again. That is one reason why I don’t travel very much in the winter months.

One Thanksgiving Daddy paid Jr. Karuka, who was known “as Crockett” to bring them to my house. Then Jr. went up North to his family for a couple of days. That was the first and only Thanksgiving my parents spent with us.

Of course that was a special Thanksgiving for me, as we had 21 people present for dinner as we had several of Jack’s family. Kids sat in the floor, on the steps and everywhere.

While my thoughts travel back in bygone years, when Jack and I were first married we couldn’t afford extra food for holidays, as we were barely able to afford necessary things.

One Thanksgiving we went to Jack’s mother’s. I made a platter of peanut butter fudge as my contribution. Jack had gotten me a portable record player, and I had managed to purchase a few records. It was decided that I would bring that for us to enjoy some music.

Each Thanksgiving over the years we would have a few of his family at our house, which we enjoyed immensely.

Divorce took its toll on the holidays, and I worked many of those, so that Thanksgiving didn’t mean anything special to me. When I wasn’t working I spent Thanksgiving alone.

Keith has been home with me for almost three years. Even though I can’t enjoy the food, I still cook for him, and this year you will find turkey and the trimmings. A couple of days later, Keith will be eating homemade turkey pot pie

My daughter Kay will have her family for Thanksgiving. I’m not sure what my daughter Angie’s plans are at the present time. If Bennie had his way, he would be at my house.

Anna and Scott will either be at Scott’s brother and his family, or vice versa, as this is a holiday tradition

There’s something that is laying heavy on my heart at the present and I don’t feel the happiness at this time of year.

Have you ever really thought about Alzheimer’s? How it not only affects the person, how it affects the family? Watching someone that I love go through this ordeal is heartbreaking. When your hands are tied and you can’t help, you don’t know what to do. You can send a get well card. For someone who is ill with Alzheimer’s, there’s nothing you can do.

Buddy and Bernice Grubb, I hope you two are doing alright. I read on the computer that Buddy had fallen. I am sorry I haven’t been in touch. I hope he is alright. I was hoping I would see you two again before winter. With this coronavirus it may be next fall. Now I am just joking about that.

Hello Les and Pat Wagner and the extended family. I will try to get in touch with you before long.

Please keep Johnny and Ann Calihan and family in your prayers as they are going through some difficult times during the holidays.

For those who would like to give someone a special gift for Christmas, why not give a DVD of the Mountain Minor, or the CD sound track of the music that was in the movie?

I have three copies left of my book, The Beauty of the Rose, $15 and $6 shipping . This is the last time The Beauty of a Rose will be printed.

Evidently I wrote something in my column that offended a reader, as I got an email, saying he was disappointed that I had entered into politics at the closing of my column. He went on to say I was misguided about Kentucky.

Let me make one thing clear, I am not into politics, and as far as being misguided, I admit I know nothing about Kentucky except I do know the mines have been shut down, and people are out of work. Let’s make it clear, I have no idea of becoming involved in politics.

Actually I had to sort of laugh at the email with all the history of Kentucky. This email brought back memories of several years ago, when I upset a reader about a column I wrote concerning mountaintop removal. That article led to the other person saying she was going to get me fired from The Mountain Eagle. I’m sorry that you were disappointed.

With that being said, I will promise that is the last time I will mention politics, just keep reading The Mountain Eagle.

Thanksgiving hasn’t been the best time for me in several years, however I make the best of it.

Life isn’t always a bowl of peaches, nor a bed of Roses.