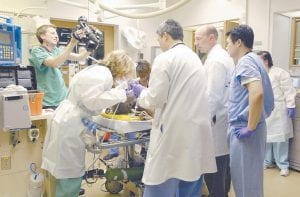 ABC cameraman Richard Chisolm, left, tapes events as ABC News returns to Baltimore’s John Hopkins Hospital for a new documentary series entitled “Hopkins.” This six-part program will take viewers inside the legendary hospital to meet patients in the throes of medical crisis and young doctors forced to make life and death decisions on the fly while struggling to keep their personal relationships from unraveling. The series premieres Thursday (June 26) at 10 p.m. on ABC. (AP Photo/ABC)

In filming a sequel to a 2000 series about Johns Hopkins Hospital in Baltimore, ABC News producers found that reality television had changed how they could present reality on television.

The network’s six-part series following the lives of doctors and patients, “Hopkins,” premieres Thursday at 10 p.m., the first of a handful of summer series from ABC News. This one traces steps first taken on “Hopkins 24/7” eight years ago.

Back then, executive producer Terence Wrong’s cinemaverite style was relatively novel for a news division and for prime-time television in general. Now television is flooded with series that feature real people but aren’t exactly nonfiction.

“If you put on a show where real human beings are fighting for their lives, the hope is that the authenticity will come through and distinguish the show from what is called reality television,” Wrong said.

TV cameras make most people nervous, but in convincing Hopkins to participate Wrong also had to deal with the cynicism of some doctors that he was making just another reality show instead of realistically trying to portray life at a big hospital. That wasn’t an issue a decade ago.

Wrong tried to counter the skepticism with time.

ABC’s crews spent four months at Hopkins, taking thousands of hours of film. Stories unfolded naturally and characters emerged. It reached the point where Quinones-Hinojosa said he forgot the cameras were there.

Alex Piper, who worked on Wrong’s crew, contrasted that with reality series he had worked on for Los Angeles-based producers who fed cable networks. Filming would be done in a month or two. Some stars of reality series have complained that they were made into caricatures so they would fit a story producers had in mind.

“Then we come on the air without manipulation or choreography,” Wrong said. “Are the viewers making a distinction? Do you get brownie points for making something that is a true documentary? The answer is no. But you have to be dramatic enough and entertaining enough to hold their attention against all of these other shows. And that’s a very high bar.”

Quinones-Hinojosa is one of several strong characters in Thursday’s first episode. He climbed over a border fence from Mexico as a youth to pick fruit in California, and eventually became one of the nation’s top brain surgeons.

Some of the stories are titillating, almost like soap operas. ABC focuses on Karen Boyle, a rare female urologist, and a couple she is treating where the man is trying to reverse a vasectomy. A resident, Brian Bethea, is chronicled in the midst of marital trouble. He agonizes on camera about it in one raw moment, fed by fatigue and emotion; yet, he’s also shown at a bar, flirting with women.

Call him the Dr. McDreamy of “Hopkins.”

It’s an apt analogy. Makers of ABC’s “Grey’s Anatomy” have told Wrong that “Hopkins 24/7” partly inspired their prime-time medical drama. Now ABC is promoting “Hopkins” with spots interspersing pictures of its real-life characters with the fictional doctors and nurses on “Grey’s Anatomy.”

It is prime-time television, after all, and Wrong said he had to pick stories with entertainment in mind. He’s studied dramas and adapted some of their techniques, such as tiny cliffhangers before commercial breaks so viewers won’t wander. The original series eight years ago used a narrator; now the story moves forward without one. Wrong also hired some struggling singersongwriters to give “Hopkins” a soundtrack.

“I hope that what people get out of this is that we are just like everyone else,” Quinones- Hinojosa said. “We’re human beings. We try to do the best we can with what we have.”

ABC’s news division will be active in prime time this summer. Also debuting this week is the limited series “Primetime: The Outsiders,” about people who live on the fringes of society. The first episode will be about a group of Amish teenagers. The network is also doing recurring true-crime yarns and a series on family secrets.

A two-hour special theorizing on what the world will look like in the year 2100 is in the works, although it’s not likely to be ready until mid-September.

The news producers have the opportunity because ABC’s regular prime-time lineup does particularly poorly in the summer. Viewers have little interest in watching reruns of serial dramas like “Grey’s Anatomy” or “Desperate Housewives,” while selfcontained dramas like CBS’ “NCIS” repeat well.

Still, there was a valedictory sense among ABC producers when they talk about long-form projects. Networks are cutting costs, and it was more difficult to get approval from the company to film “Hopkins” than it was a decade ago, said Phyllis McGrady, ABC News senior vice president for creative development.

The ratings performance of “Hopkins” will say a lot toward whether ABC News gets to make similar series in the future, she said.

“I feel like it’s a unicorn,” Wrong said of the project. “It’s the rarest of things. You don’t see this sort of thing on network television.”