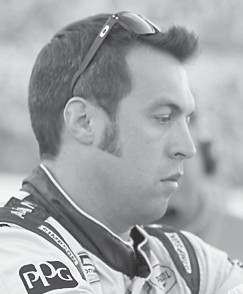 To some extent, Sam Hornish Jr. is uncomfortable with the idea that he is benefiting from another driver’s adversity. That won’t stop him from jumping on another chance to race in the Sprint Cup Series.

Given Hornish’s own struggles in NASCAR the past few seasons, the former IndyCar ace is thankful for any chance to redeem himself — even if it took A.J. Allmendinger’s failed drug test to give Hornish another shot.

“After going through what I went through in the last year, I don’t wish anybody any ill will,” Hornish said. “But we’re not turning sponsors away, teams aren’t turning sponsors away. You’ve got to be very thankful for what you have right now and the opportunities you’ve been given. However I get it, I’m going to try to make the most of it.”

NASCAR suspended Allmendinger indefinitely Tuesday after a test of his backup urine sample confirmed the original positive result. The violation of NASCAR’s substance abuse policy puts Allmendinger’s future in NASCAR and at Penske Racing in doubt.

He originally was suspended July 7 after failing a random drug test taken in late June. His backup “B’’ urine sample was tested Tuesday by Aegis Analytical Laboratories in Nashville, Tenn. Allmendinger has said he tested positive for a stimulant, but not revealed the exact substance. He said he would never knowingly take a banned substance…

With Allmendinger in limbo, Hornish has driven the past two Cup races in the No. 22 Cup car in addition to his full-time duties for Penske in the Nationwide Series.

Hornish could now get the chance to chance to race in the Cup Series the rest of the season.

“The way I look at it is, you know, what am I going to say to him?” Hornish said. “Obviously, I don’t have any ill will or anything toward him. So it’s a tough situation for everybody, because we’re all trying to figure out what’s going to happen and nobody knows.”

Penske Racing announced Tuesday that Hornish will drive the No. 22 car this weekend at Indianapolis and next weekend at Pocono.

Hornish says he has learned from his struggles in NASCAR, which left him without a full-time ride last season.

Now back running a Nationwide schedule for Penske, he hopes to use a run of consistent performances to prove to sponsors and teams that he deserves another shot in the Cup. After an eighth-place finish at Chicagoland Speedway on Sunday — he led 22 laps before getting shuffled back in the pack on pit strategy — Hornish is fourth in the series standings and 42 points behind leader Elliott Sadler.

Hornish said not having a fulltime ride in 2011 after three crashfilled and inconsistent seasons allowed him to spend more time with his family and spend more time observing other drivers.

“Sitting on the side of the pool instead of trying to figure out how keep my head above water was definitely something that allowed me to learn,” Hornish said.

Running a partial Nationwide schedule for Penske in 2011, Hornish won at Phoenix to regain some confidence.

Racing full-time in Nationwide this season has cost him time with his family — he’s still trying to finish off a tree house for his daughters to play in — but he wants to do as much racing as possible to continue his development.

Ideally, he’d get to run full time in the Cup Series next season, with a large Nationwide schedule to give him more track time. But his main goal is making sure he has a full-time ride somewhere.

He believes his past experience and current success in Nationwide will be attractive to sponsors, but realizes he has to do a better job selling himself.

“It’s a tough thing, because I’m not one to really talk myself up,” Hornish said.