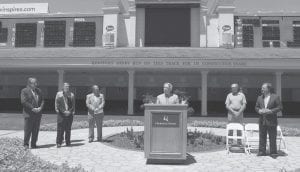 Horse owners are out of the gate with an advertising campaign intended to persuade Kentuckians, especially Kentucky lawmakers, to allow the state’s racetracks to offer casino-style gambling.

The advocacy group Kentucky Equine Education Project contends in glossy brochures mailed to some 250,000 households last week that the state’s signature industry is in danger. And in a radio ad that aired last week across most of the state, including the Louisville and Lexington metro markets, the group says Kentucky is at risk of seeing some racetracks close.

“Expanded gaming at tracks in Pennsylvania, West Virginia, Florida and Indiana have given those states a competitive edge, luring away our owners, trainers and horses,” a narrator warned in ominous tones. “Kentucky tracks are being forced to cut race days and some are on the verge of closing forever. Politicians in Frankfort have stood by for years as other states have put our signature industry in a competitive disadvantage. It’s time for the legislature to level the playing field.”

Patrick Neely, executive director of the advocacy group, said a new radio ad will begin airing next week. He declined to say how much money is going into the advertising campaign.

Opponents don’t seem worried. Martin Cothran, spokesman for the anti-gambling group Say No to Casinos, joked that Neely and his organization would be better advised to put the money into purses at Churchill Downs if the financial outlook is as bleak as they contend. Say No to Casinos has staunchly opposed any expansion of gambling in Kentucky, fearing it would foster social ills, including increased crime and addiction.

Churchill executives, along with officials from several other racetracks, gathered in Louisville last week to plead their case for the proposed video gambling terminals. It has become a familiar re- frain after two years of intense lobbying.

Gov. Steve Beshear, who centered a successful 2007 election campaign around a proposal to open the state to casino-style gambling, said last week the stakes for the state’s $4 billion horse industry are too high not to take action. The industry, he pointed out, employs about 100,000 Kentuckians.

So far lawmakers have been unwilling to approve various versions of the plan to open the state to casino-style gambling.

A proposal to allow video gambling at seven race tracks died in the last legislative session without being brought up for a vote on the House floor. A broader plan to open up to 12 freestanding casinos died the year before.

House Speaker Greg Stumbo, who sponsored the video gambling terminal proposal earlier this year, said at the time that it lacked enough support to pass either the House or Senate. But it could be resurrected in a future legislative session, even a possible special session this summer if Beshear chooses to call lawmakers in.

Proponents say the measure would not only help the horse industry but also state government, because taxes on gambling proceeds could generate up to $300 million a year to pay for needed services at a time of huge budget cuts. The state faces a possible $1 billion revenue shortfall.

Beshear sees the move as vital for the horse industry, saying he doesn’t want Kentucky “to be known as the former horse capital of the world.”

Kentucky horse racing executives argue that racetracks in neighboring states have been able to boost purse sizes by supplementing them with proceeds from casinos and slot machines, which helps attract more and better horses. They contend that Churchill is losing business, while other Kentucky tracks, such as Ellis Park and Turfway, are struggling to survive.

While Kentucky-bred horses continue to dominate, winning 69 percent of all graded stakes races in the United States so far this year, many are now racing in states that offer purses fattened by revenue from casino gambling.

Cothran said, given the nation’s strained economy, lawmakers need to be finding ways to help people struggling to survive financially.

“We have Kentuckians who are losing their jobs, who are being put on furlough by their employers, and who can’t pay their mortgages,” Cothran said. “The solution to that is not fattening the bank account of Churchill Downs. This is a millionaires’ bailout.”

Cothran said the proposal lacks support among lawmakers. And, even if they did pass a measure allowing video gambling terminals at racetracks, he said the matter would immediately be taken to court on a constitutional challenge. Although Kentucky has a long tradition of wagering at horse tracks, the constitution specifically forbids casinos.

Proponents argue that the casino style gambling offered in the video terminals would be allowed under the same constitutional amendment that allowed Kentucky to begin a state lottery.

Neely and the horse group have sent two mailers so far this year. The first, which went out before the Kentucky Derby, reminds people that the horse industry provides jobs to a wide array of people, from farmers to truck drivers, accountants to veterinarians, tack suppliers to grooms.

“These people feed their family and support Kentucky’s economy based on the success of the horse industry YEAR ROUND — not just one day a year,” the mailer said. “So while Kentucky Derby Day is rightfully celebrated as a day when the world focuses its attention on our home state, there are 364 other days in the year when people across Kentucky depend on the success of the horse industry.”

The brochure sent out last week has a cover photo of a horse being loaded into a trailer. The headline accompanying it was an attention-getter: “The Horse Industry is Leaving Kentucky,” it says. “The question: How will Kentucky Respond?”

Neely said it’s important that Kentuckians know what the stakes are.

“We just felt that right now it is imperative for us to communicate as broadly and succinctly as possible what our industry is facing,” he said.