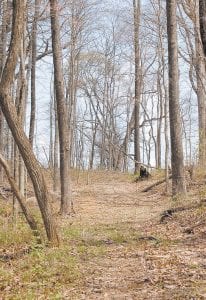 Some work was done earlier on the Pioneer Horse Trail, which winds its way through trees along Little Shepherd Trail atop Pine Mountain.

The Letcher County Fiscal Court has been given approval by the Kentucky Department of Fish and Wildlife to move forward with the Pioneer Horse Trail atop Pine Mountain.

“I think it was just a lot of misunderstanding,” said Wildlife Commissioner Voncil Thacker. “It’s a state resource and everyone needs to get along and enjoy it.”

The horse trail, which has been in the works since 2007, had been held up over state and federal requirements for more than three years. In December 2008, former Wildlife Commissioner Jon Gassett ordered a halt to work on the horse trail after Kentucky Resources Council Executive Director Tom FitzGerald wrote letters to Gov. Steve Beshear and Gassett complaining about bulldozer work on Little Shepherd Trail.

Mark Marraccini, spokesperson with Fish and Wildlife, said the county has fulfilled its commitment to comply with state and federal regulations up to this point and can proceed.

“We’ve got everything on the right track and we are ready to move forward,” said Letcher County Judge/ Executive Jim Ward.

Ward said an environmental assessment has been conducted as well as archeological surveys. Two trail design specialists were hired by the county to ensure proper placement of the trail to prevent soil erosion, he said, and the trail was re-routed in a few places that were too steep.

“I wouldn’t want it to be done any other way but the right way,” said Jimmy McIntosh, president of the Letcher County Pioneer Horse Trail Committee.

McIntosh has worked with local and state officials on the horse trail project.

“I’ll be happy to ride through there and say this is something that has been accomplished,” he said.

The horse trail, with portions of it running parallel to Little Shepherd Trail, will be about six miles long one way and starts at the old entrance to Little Shepherd Trail, which is about a fourth of a mile near a large overlook. Ward said there is a proposal to extend the horse trail to the Harlan County line, which would make the trail 16 miles long.

The trail path is under tree canopies, which McIntosh said horse riders will enjoy.

Ward said Fish and Wildlife officials identified which trees located near the trail could not be removed and which ones could be cut down. Marraccini said Pine Mountain contains federally protected species that use some of the trees located in that area for habitats.

Ward said work will begin this week to clear out some trees that have been approved to be removed, and he is hopeful the horse trail will be open by late summer.

“We got permission to take a small excavator up there and work on it some,” he said.

Ward said about 75 percent of the horse trail was an old wagon trail used transport dry goods and didn’t need much work done to it.

Thacker said he is excited for Letcher County and the people who have worked to make the horse trail a reality.

“I’m just glad to see it on the way,” said Thacker. “It had a lot of good people behind it.”

Thacker said Pine Mountain is “absolutely gorgeous” and the horse trail is a part of adventure tourism.

“This will be absolutely wonderful for our area,” said State Rep. Leslie Combs. “It will be a great attraction obviously for tourism.”

Ward said not only will the trail be a draw for people from outside the county, but Letcher County residents will also have a horse trail to explore.

“Pine Mountain is a gifted spot for nature,” said McIntosh. “I think a lot of people will enjoy it.”