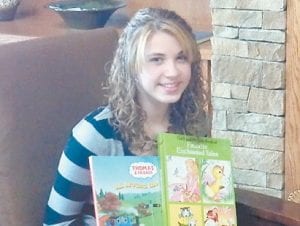 The connection was instantaneous. Upon hearing about Hospice of the Bluegrass volunteer needs in a community presentation, Courtney Jackson wanted to help. Courtney is a student at Letcher Central High School in Whitesburg. “It is rare to have a student be so passionate about Hospice care but it didn’t take us long to see that Courtney is not a typical teen,” said Linda Eversole, coordinator of Volunteer Services.

After volunteer training, Courtney went on her first tour of the Greg and Noreen Wells Hospice Care Center in Hazard. She was so moved with compassion and saw so many needs that she left that day with many service ideas floating around in her head.

She first asked her church for a donation to buy snacks for the inpatient unit family rooms. They gave the donation and she did the shopping, bringing in great items for patients and families to enjoy. She has also volunteered in many other ways including visiting with a teen daughter of a patient in the Greg and Noreen Wells Hospice Care Center. 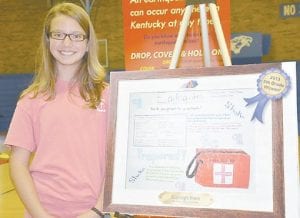 Kayleigh Bates, a fifth grade student at Letcher Elementary School, won the 2013 Kentucky Emergency Management Earthquake Program poster contest. Bates’s poster, which explains how to be prepared for an earthquake, was chosen as the school winner at Letcher Elementary School and was submitted for the state contest. She won a Kindle Fire and a framed copy of her poster. Bates’s class participated in lessons about earthquake preparedness.

Courtney’s most recent project is a book drive. She saw the children’s play area and decided to gather books to add to the collection. Starting out her goal was 100 books. The local newspapers and radio stations helped get the word out about her project. When she brought in the first donation she had over 600 books and then later received a donation of several large boxes from the local Walmart. This display of community support was so impressive to Courtney.

“Courtney is modest about her efforts on our behalf,” says Eversole. “She says the reason she is so compassionate is because as a child she helped care for an ailing grandmother and could rarely leave her side.” Courtney adds, “I’ve been there before and it was lonely. I would have loved to have had something to read or a special snack. Just knowing someone cares makes anybody feel better.”

Even though one project is complete, Courtney is not slowing down. Her volunteer time is limited because of her workload and school schedule, but she has been busy baking and delivering cookies, brownies and other treats for the staff, patients and families.

“We are so thankful to have such a talented and compassionate teen volunteer,” says Eversole. “We also send a big thanks to Daisy, Courtney’s mother, who has given unlimited time, resources and lots of help.”