Hospital addition should be completed by summer 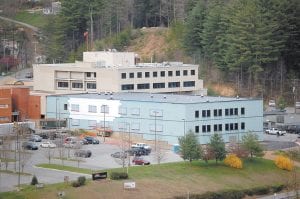 The 15,000-square-foot addition to the Whitesburg Appalachian Regional Healthcare (ARH) hospital is 65 to 75 percent complete. The new addition will include 16 private patient rooms for delivery recovery and post operation patients. Four labor and delivery rooms, a 12-crib nursery, a dedicated Caesarian-section suite and two family waiting rooms are also in the design plans. The outside of the building is being covered with Dryvit, a brand of exterior insulation and finish systems (EIFS), which is a type of exterior insulation.

A new wing at the Whitesburg Appalachian Regional Healthcare (ARH) hospital is on target to be completed by early summer. The first patient is expected to be treated in the 15,000-square-foot addition on June 27.

“ We’re transitioning from the bricks and sticks portion to the finish work and the marketing and planning a big party for the grand opening,” said Dena C. Sparkman, the hospital’s community chief executive officer.

The new addition for surgery, postpartum, obstetrics and nursery is 65 to 75 percent complete.

“We will have a building that is as lovely inside and out as the people that we have that work inside of it,” said Sparkman.

The building is now in different stages of completion.

Sparkman said each headwall costs at least $ 25,000 and are large structures located on the wall near the head of a bed.

“As you can imagine ( they) are complicated pieces of equipment,” she said. “They have to have all of the electrical plugs, all of the controls for the bed, all of the medical gases, all of the things that nursing need to take care of patients — oxygen, suction, medical gas.”

Sparkman said each of the labor, delivery and recovery rooms will have a twin-size sleeper sofa to enable a spouse or other family members to be part of the process. The private rooms will have a sleeper chair.

Because the project is funded through a lowinterest loan from the U.S. Department of Agriculture, all materials and equipments must be made in America.

“We are very proud of that,” said Sparkman. “In this day in age that says a lot.”

She said it was difficult to find some the construction items made in America.

She said staff played a major role in the design of the new wing, including a step-up window built in front of the nursery so young siblings can easily view the baby.

“There are features designed to help with privacy and ease of use,” said Sparkman.

“Our current waiting rooms have both the OB families and the ICU families in the same place,” said Sparkman. “ Those people come from two entirely different ends of the emotional spectrum.”

Plans for the wing include

16 private patient rooms for delivery recovery and post operation patients, four labor and delivery rooms, a 12- crib nursery and a dedicated Caesarian section suite. The upper level of the new addition, which will make the hospital look “T” shaped, will connect to the entrance of the laboratory on the first floor of the hospital.

Once the new wing is complete, the $10.8 million project will also include renovations to the third floor of the hospital.

Third-floor renovations include the remodeling of 20 private rooms for medical and surgical patients, including six intensive care rooms. One regular isolation patient room will be added to contain potential infections.

The hospital will be minus seven beds by closing the entire third floor during renovations.

“ That’s the fact that makes us think it is possible to close down an entire floor for renovations,” said Sparkman. “The timing of these is working out very well. The census is traditionally a little slower during the summer months.”

When the renovations are completed in February 2012, all patient rooms on the third floor will be private rooms.

“I don’t know that there is any other facility that can say that,” said Sparkman.

With the completion of the new wing and the third-floor renovations, the number of private rooms available at the hospital will increase from 17 to 44.

“I think from a community benefit perspective it’s about the private rooms,” said Sparkman. “Healthcare is not about having a roommate, so I think the private rooms is just a big deal. It’s just an improvement in our overall operations.”

“When we first started touring and took the OB staff up, there was not a dry eye in the bunch,” she said. “ The OB staff has really had an emotional reaction seeing all of that space.”

ARH employees have named the project the “Build, Heal, Thrive Campaign” and have organized a number of fund-raisers as well as contributing financially themselves. About $1.1 million of the funding comes from various fund-raising efforts.

“We have been remarkably successful in combination in community support and employee contributions,” said Sparkman. “This has been the most successful project in the ARH Foundation.”

Hospital employees will be the first to tour the newly completed wing. A VIP reception is planned for the night before the ribbon cutting for people who have purchased rooms, served on committees or have been involved in the Build, Heal, Thrive Campaign.

Senator Mitch McConnell and Congressman Hal Rogers will attend a public ribbon-cutting ceremony, which will take place later this spring. A date is being confirmed and will be announced soon.