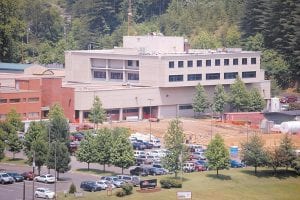 WELL UNDERWAY — A new 15,956-square-foot wing being constructed at Whitesburg Appalachian Regional Hospital is 10 percent complete and is expected to be finished by June 2011. The new addition will include 16 private patient rooms for delivery recovery and post operation patients. Four labor and delivery rooms, a 12-crib nursery, a dedicated Caesarian-section suite and two family waiting rooms are also in the design plans. (Photo by Sally Barto)

Construction of a new wing for women’s health services at the Whitesburg Appalachian Regional hospital may be finished in about a year.

Dena C. Sparkman, the hospital’s community chief executive officer, said a 15,956-square-foot addition for surgery, postpartum, obstetrics and nursery could be in use by next June.

Plans for the wing include 16 private patient rooms for delivery recovery and post operation patients. Four labor and delivery rooms, a 12- crib nursery, a dedicated Caesariansection suite and two family waiting rooms are also in the design plans.

The upper level of the new addition, which will make the hospital look “T” shaped, will connect to the entrance of the laboratory on the first floor of the hospital.

“There has been such a need for this project for such a long time and we are so excited to have it underway,” said Sparkman. “At a time when a lot of the areas are economically depressed and don’t have a lot of things going on, we have new construction in this community and I think that’s important.”

Once construction is finished with the wing, the third floor of the hospital will undergo renovations, which Sparkman said should take six months to complete.

Third floor renovations include the remodeling of 20 private rooms for medical and surgical patients, including six intensive care rooms. One regular isolation patient room will be added to contain potential infections.

The $10.8 million project includes an increase of private patient rooms from 17 to 44.

“In the past they have talked about this is the women’s project or this is the OB project,” said Sparkman. “Actually it is a lot bigger. Everybody can benefit from the private rooms.”

ARH employees have named the project the “Build, Heal, Thrive Campaign” and have organized countless fund-raisers as well as contributing financially.

“We have said that we intend to raise this money one cupcake at a time,” said Sparkman. “Everything from bake sales to poker runs to golf tournaments. It means a lot to us.”

Sparkman said the hospital employees have a vested interest in the project and five departments have pledged 100 percent participation in helping financially with the project.

“The employees have been great, everything from their pledge of financial support to their education about it,” said Sparkman.

People in the community have been supportive of the project and want to know the progress of the construction project, she said.

“We just appreciate the Letcher County Fiscal Court and the community for their support,” said Sparkman.

Because of construction, traffic heading to Home Health or physical therapy, which are located behind the hospital, is being routed all the way around the front of the building, she said.

A temporary road has been created between the back of the homecare store to River Park, allowing equipment to be transported to the hospital property. Sparkman said the road is not open to the public yet but could eventually be used as an exit from the hospital.