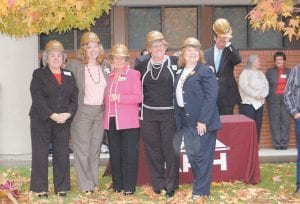 Whitesburg hospital administrators say a major renovation and expansion project could be completed in 18 months.

The plan calls for construction of a 15,000-square-foot addition for clean surgical, postpartum, obstetrics and nursery as well as renovations to the third floor. The $11 million project includes an increase of private patient rooms from 17 to 44.

Dena C. Sparkman, community chief executive officer at Whitesburg Appalachian Regional Hospital, told hospital staff and community members at a groundbreaking ceremony on Nov. 18 that she sees the project as a strategic move for Whitesburg ARH.

“As we considered the current and future needs of the patients here at Whitesburg ARH, it became apparent that renovation of the hospital, combined with an addition to the current structure was the best option,” said Sparkman. “The new and renovated spaces will provide state-of-the-art facilities customized to meet the needs of our patients and our community.” 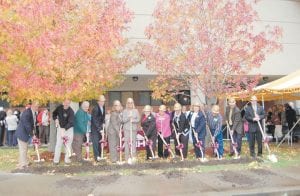 Third floor renovations include the remodeling of 20 private rooms for medical and surgical patients, including six intensive care rooms. One regular isolation patient room will be added to contain potential infections. Sparkman said nursing stations, designed with workflow patterns and optimum patient care in mind, will be updated for medical/ fortable waiting rooms with ample seating will also be included in the third floor makeover.

“We look forward to the continuous growth and prosperity of this facility,” said Russell Bentley, chairman of the ARH Board of Trustees.

The upper level of the new addition, which will make the hospital look “T” shaped, will connect to the entrance of the laboratory on the first floor of the hospital. Sparkman said 16 private rooms for surgical patients, delivery and post-operative non-infectious patients will be located on the first floor, making it more convenient for patients.

The design includes four labor and delivery suites, which will have hardwood floors and a more home-like feel. There currently are two delivery rooms. A 12-crib nursery will have a step for siblings to be able to view their new family member easier. A dedicated Csection suite, two family waiting rooms and a patient education center for new families will be added as well.

“The building on the outside will be as wonderful as the people on the inside,” said Sparkman.

Sparkman said Whitesburg ARH is prepared to ensure excellent care to its vibrant community with the attention that only a community hospital can provide.

“We are truly blessed that people we have known for years and can rely on are at Whitesburg ARH Hospital to care for our families when we need them,” said Sparkman. “Our neighbors make up the talented and awardwinning staff of more than 45 physicians representing 23 medical specialties.”

Sparkman said Whitesburg ARH is a community hospital in the best sense of the term.

“It is part of our community, and it belongs to all of us,” said Sparkman.

“I appreciate everyone who has given to this project,” said Jerry Haynes, president and chief executive officer of ARH.

Haynes said the Whitesburg hospital is known for quality and service and the new addition and renovations will help hospital staff to better serve patients.

“This is a project we have been working on for several years,” said Haynes. “It comes down to the needs of the community. The need is there and we’re proud to be able to fulfill it.”