By TOM LOFTUS and DEBORAH YETTER The Courier-Journal 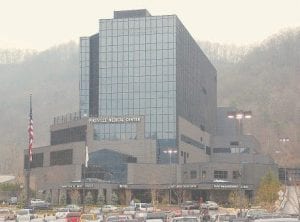 FLETCHER’S NEW PLACE OF WORK – Former Gov. Ernie Fletcher now works at the Pikeville Medical Center in Pikeville. He was hired after his administration approved a rare, $3.4 million Medicaid claim filed by the hospital. (Photo by Chris Anderson)

The eastern Kentucky hospital that has hired former Gov. Ernie Fletcher as a consultant got a $3.4 million state settlement in the final weeks of the Fletcher administration for disputed Medicaid claims.

Records from the state Department for Medicaid Services show that last Oct. 9, the state agreed to pay $3,446,836 in exchange for Pikeville Medical Center dropping its claims for additional reimbursement.

Although 45 hospitals have made similar claims against the state, it was the only settlement reached late in the Fletcher administration and one of only two last year.

The settlements left the other hospitals wondering why they were left out, said Stephen R. Price, a Louisville lawyer who represents 32 of them.

“I’ve been kind of shut out from settlement discussions,” he said. “I’ve had more than one client ask, ‘Why couldn’t we get the same deal?”‘

But David Fleenor, who was his general counsel at the end of the administration and is authorized to speak for the former governor, said he sees no conflict between the consulting job and the settlement.

“That (the settlement) was done through the (health and family services) cabinet,” Fleenor said. “That was not done though the governor’s office.”

The agreement was signed by the state’s Medicaid director at the time, Shawn Crouch.

Walter May, president and chief executive officer of Pikeville Medical Center, did not respond to phone messages left at his office today.

But the hospital’s attorney, Masten Childers II, rejected any suggestion that there was a connection between the settlement and Fletcher’s consulting deal.

“I don’t think the governor had a thing in the world to do with the settlement,” he said. “And I handled the negotiations in this.”

The hospital has not said how much Fletcher is being paid under the consulting agreement.

Mark D. Birdwhistell, Fletcher’s secretary of health and family services, declined today to discuss why the cabinet settled claims only with the Pikeville and Baptist Healthcare System Inc.

“I don’t think I want to talk about it,” he said. “That world is behind me now.”

He also declined to comment on a statement by Fleenor that Birdwhistell and Fletcher are considering working together as health-care consultants.

Letters obtained by The Courier Journal under the state’s open-records law show that Birdwhistell and Childers corresponded about the Pikeville settlement.

In an Aug. 31 letter, Birdwhistell said the cabinet had found the hospital’s “calculations of the shortfall” to be accurate. He committed to providing a settlement under the same terms as the one approved earlier in the year with Baptist Healthcare.

At issue is the complicated issue of how much Medicaid, the federal-state program that covers health care costs for the poor and disabled, agreed to pay hospitals for care in 2004 and 2005.

Johnson said the cabinet’s policy under Beshear is generally not to settle such claims. She said her understanding is that the reimbursement decisions conformed to regulations and that no errors were made in calculating amounts.

She also said that the agreement with Pikeville Medical Center and a $12.8 million settlement in March 2007 with Baptist Healthcare must be paid without the help of federal matching funds.

The federal government, which normally covers 70 percent of Medicaid’s costs, refused to participate in the two settlements on grounds that the original fees paid were consistent with the state’s reimbursement rules, Johnson said.

That means the state, at a time when it is facing severe budget problems, could be solely liable for up to $180 million in claims if the other hospitals prevail, Price said.

Pikeville Medical Center announced earlier this month that it had retained Fletcher, a physician, as a consultant.

The announcement said he would review the hospital’s physician residency program and its employee wellness program.

Childers said the basic terms of the Pikeville settlement mirrored those in the earlier agreement with Baptist Healthcare. And he said the settlement turned out to be a good deal for the state.

“We significantly compromised our claim. I don’t think there’s any question that we left a couple million dollars on the table,” Childers said. “Why did we settle? Because we wanted the money now.”

Johnson said last year’s two agreements “seem to be a bit atypical because typically settlements are negotiated regarding calculation errors, not methodology. Our state plan … does not recognize this type of settlement where they are actually challenging the methodology.”

Mathew Klein, a lawyer who represents Baptist Healthcare, said he believes the state was willing to settle with the chain because it’s one of the state’s biggest nonprofit health-care systems and serves a large number of Medicaid patients.

He also said Baptist had one of the larger claims and was further along in the appeals process than the other hospitals.Some of the other hospitals he represents would like a settlement similar to the one Pikeville received, he said.

“I’ve got a bunch of clients who would rather be putting their efforts into taking care of people,” he said.

Reprinted from the Feb. 20 edition of The Courier-Journal in Louisville.