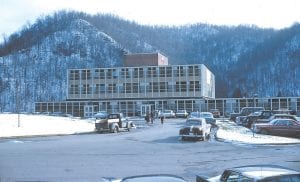 The Whitesburg Appalachian Regional Hospital had been around for about nine years when Dr. John Engle took this photograph in the winter of 1965. The hospital, built by the United Mine Workers of America, officially opened for business as Whitesburg Memorial Hospital on March 23, 1956. Its first inpatient was Mrs. Verdie Day of Mayking. On April 2, 1956, the first baby was delivered at the hospital, a girl born to Mr. and Mrs. Joe Varson of McRoberts. In October 1963 — eight years after it opened — ownership of the Whitesburg hospital and five other UMW-owned hospitals was assumed by Appalachian Regional Hospitals Inc., a non-profit corporation set up under sponsorship of the United Presbyterian Church Board of National Missions. Dr. Engle, the photographer who took this photo, joined the hospital staff as a general practitioner in September 1964 after being assigned to the region by the Mennonite Central Committee, a body of the United Mennonite Church.