Hospitals to elderly: Out of bed! 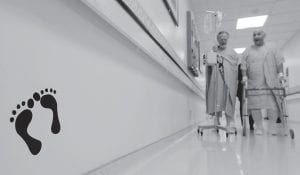 Patients Bob Landorf, left, and Anthony Pazzur walked the corridors of Northwest Community Hospital in Arlington Heights, Ill., along a path marked with footprint decals every ten feet. The hospital pairs patients with hospital volunteers, who get patients up out of bed and moving. (AP Photo)

Bob Landorf walked miles during his hospital stay, dragging his IV pole along, too, on a mission to upend disturbing statistics for patients his age.

At least one-third of hospital patients older than 70 leave more frail than when they arrived, and many become too weak to go home. Nursing home care or rehabilitation often are needed, and even then, research suggests more than twothirds remain weaker a year after being in the hospital.

Elder-care experts challenge the idea that this decline is an inevitable part of growing old. They say conventional hospital care focusing on treating disease rather than preventing frailty contributes to the problem.

“ Non- medical people say, ‘Grandma went to the hospital with pneumonia … and she was never the same again,” said Dr. Kenneth Covinsky, a geriatrics specialist at University of California at San Francisco. “Pneumonia is a serious illness, but it is treatable” and should not leave patients disabled.

He and other advocates say hospitals need to revamp old-fashioned models of patient care to address the nation’s aging population — from getting patients out of bed to offering better food and homey surroundings.

“ Life has 100 percent mortality. But if you can change the age at which people lose function,” they may live longer, better lives, said Covinsky, who wrote about the issue recently in the Journal of the American Medical Association.

Some already are heeding the call, including the suburban Chicago hospital where Landorf was recently treated.

Intestinal discomfort sent Landorf to Northwest Community Hospital in Arlington Heights last month. Doctors put the 74-year-old part-time chemist on intravenous fluids and ran tests for a suspected blockage. But they didn’t confine him to bed.

Two hospital units have volunteers who accompany patients on daily walking sessions of at least 15 minutes, their course marked by footprint decals on hallway walls. Landorf figures he did at least 20 laps daily during his stay.

His only complaint? “It would be nice if they had longer paths,” he said.

Doctors found no intestinal blockage and sent him home after three days. Now he’s back to working out three times a week, just like before his hospital stay.

Landorf thinks all that walking helped keep him in shape. The benefit is obvious, he said. “Any kind of exercise you can get when you’re bedridden is good.”

Days of bed rest raise chances for infection, can slow recovery from common conditions in the elderly including pneumonia, and contribute to surprisingly rapid loss of muscle strength in older patients. Dina Lipowich, Northwest’s head of nursing and geriatrics, said the hospital is evaluating whether the walking program has reduced those risks.

“ We want to preserve their independence,” Lipowich said. “Gone are the days when we needed to stay in bed to get better.”

Other hospitals, like Highlands Hospital in Birmingham, Ala., are changing standard mealtime practices to keep patients from losing weight. Busy staff may overlook whether patients eat, said Dr. Kellie Flood, medical director of a special elder-care unit at Highlands, operated by the University of Alabama at Birmingham.

The program is modeled after one at the University of Texas Medical Branch in Galveston, and Flood is evaluating whether the Alabama program has improved patients’ function or shortened hospital stays.

She called it “one tiny piece” of maintaining baseline functioning.

The elder- care units where such efforts occur are one of the best-known models of geriatric hospital care, typically featuring specialists, nurses, physical therapists and other staff- ers who collaborate to keep older patients from becoming frail.

Often there is carpeting, special lighting or curtains to make older patients feel more at home. But the concept also involves challenging standard practices, from bed rest and feeding methods to routine use of things like urinary catheters that can increase risk of infection and which studies have shown are often needlessly used in older patients.

Developed more than a decade ago, the units have been slow to catch on. Fewer than 300 hospitals have them, or less than 10 percent of the nation’s more than 4,000 hospitals.

Startup costs, typically at least $200,000, may be a key reason, but these units can save money in the long run, said Dr. Kyle Allen, an eldercare expert who worked for Summa Health System in Akron, Ohio.

A comparison showed that hospital stays for patients in these settings there were almost half a day shorter than for those in standard hospital units, Allen said. “ That doesn’t sound like a lot,” but it translates to hundreds of thousands of dollars in annual savings, he said.