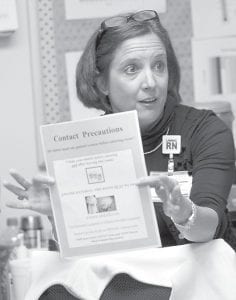 University of Maryland Medical Center infection control specialist Michael Anne Preas talks with ICU nurses about infection control in Baltimore. Every doctor, nurse and visitor who enters an intensive care patient’s room at the University of Maryland Medical Center dons a bright yellow surgical gown and gloves so germs don’t spread. Patroling the ICU like a cop on the beat is an infection preventionist, part of the change underway in U.S. hospitals to slash hospital-spread infections that claim an estimated 99,000 lives a year. (AP Photo)

This is no ordinary intensive care unit: Every doctor, nurse, friend or loved one must cover their clothes with a bright yellow gown and don purple gloves before entering a patient’s room so some scary germs don’t hitch a ride in or out.

It’s part of the University of Maryland Medical Center’s crackdown on hospital-spread infections, and Michael Anne Preas patrols the ICU like a cop on the beat to help keep bacteria in check.

You forgot your gloves, Preas leans in to tell a doctorin training who’s about to examine a man with a breathing tube. Startled, the resident immediately washes his hands and grabs a pair.

Peering at the IV tube inserted into another patient’s neck, Preas spots a diff erent opening for bacteria: His long beard is messing up what should be an airtight seal. Let’s shave that spot and put in a new catheter, she tells the nurse.

Nor does a janitor escape Preas’ inspection. Yes, she put on clean gloves between collecting trash and moving carts that nurses will touch.

Infections caught at health care facilities are one of the nation’s leading causes of preventable death, claiming an estimated 99,000 lives a year. Yet chances are you’ve never heard of Preas’ job: She’s an infection preventionist, part of an evolution under way as hospitals are pushed to slash those rates or lose lucrative Medicare dollars.

“You have to be out and about,” says Preas, who with a team of four other specialists checks parts of this large Baltimore teaching hospital for infection-control steps, looking to identify the inevitable spots where fast-paced care can allow the bugs an entry. Doctors and nurses are under orders to heed their advice.

The program is unusual. There are only about 8,000 to 10,000 infection preventionists nationwide, and in most smaller hospitals they’re occupied with documenting infection statistics or advising doctors about specific pathogens, according to the Association for Professionals in Infection Control and Epidemiology.

But with some other steps, it’s starting to pay off : This surgical ICU has gone 24 weeks without a single case of one of the most insidious hospital infections, where bacteria infi ltrate the bloodstream through that easy-to-contaminate IV catheter called a central line. Hospital-wide, those central line infections have dropped 70 percent in the past year.

“Every single nurse and doctor and staff member who touches a patient can either prevent or not prevent an infection from occurring,” says chief medical officer Dr. Jonathan Gottlieb.

Not too long ago, specialists like Preas were “prophets in the wilderness,” he says, struggling to advise about best practices but not typically at the bedside to see the barriers.

“We can say, ‘Do this, do this, do this,’ but we have to convince people to change,” adds Dr. Kerri Thom, an epidemiologist who accompanies Preas on her daily rounds.

With 1.7 million healthcare-acquired infections a year, adding $20 billion to the nation’s health bills, infections have long plagued hospitals. But they’re getting renewed attention as the federal government aims to cut certain types in half in the next few years, linking success to dollars. Already, Medicare has begun cutting payments to hospitals with high rates of certain infections, cuts that will increase by 2015 under the new health care law.

Part of the challenge: For every patient suff ering an obvious infection, another five to 10 may carry the same bacteria into the hospital with no symptoms — germs on their skin or in their noses that can threaten the patient in the next room, or even the carrier himself if the bugs slip into the bloodstream through a surgical wound or catheter.

Hence the decision by the University of Maryland Medical Center to have every visitor to a surgical ICU room don a gown and gloves. Researchers found one dangerous germ, acinetobacter, is especially easy to spread — lurking on bed rails and IV pumps and other places that mean even workers not touching the patient could walk out contaminated.

“If we weren’t wearing them, it would be on our clothes,” Thom says of the protective gear, noting that infection specialists tend not to wear health care’s ubiquitous white lab coats.

Without frequent washing, “if you wear your lab coat everywhere you go, it becomes a walking germ,” Preas adds.

And some germs need a stronger attack than others: On this fall day, Preas tells ICU nurses to post new browncolored warning signs on the rooms of people with diarrhea, a possible sign of an intestinal superbug named Clostridium difficile, or C-diff .

Health workers tend to use alcohol-based hand sanitizers that work well on most germs but won’t kill the fecal spores that spread C. diff , she explains. While there’s debate about the best approach, she advises the ICU nurses to wash hands with soap and water after removing their gloves and leaving those rooms — and to clean the room’s equipment with bleach.