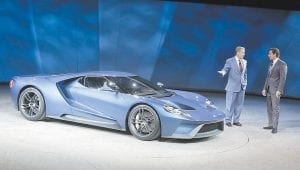 The North American International Auto Show began this week in Detroit with media and industry previews. It opens to the public Jan. 17.

Here are some of the new cars and experimental concept vehicles unveiled at the show:

— FORD GT: Ford stunned the crowd with its new GT, a high-performance supercar. The lightweight, carbon fiber GT has a twin-turbocharged 3.5-liter EcoBoost V6 engine that produces more than 600 horsepower. The two-seater has deep, dramatic scoops in the hood and the sides and advanced aerodynamics, including a deployable rear spoiler. It’s Ford’s first GT in more than a decade and one of 12 new Ford performance vehicles coming to market by 2020. The GT honors the 50th anniversary of the original GT40’s 1966 victory in the 24 Hours of Le Mans. Ford Executive Chairman Bill Ford says the new GT will go on sale late next year, first in the U.S. Production will be limited. Pricing will be announced later, but Bill Ford says it will in the range of other exotic supercars like the $200,000 Lamborghini Gallardo. 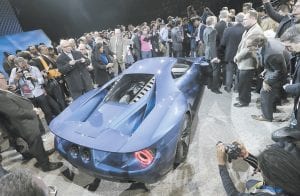 A HIT WITH THE PRESS — Journalists surround the new Ford GT after it was unveiled this week at the North American International Auto Show in Detroit. (AP Photo)

— ACURA NSX: The production version of Acura’s NSX got a boost from Jerry Seinfeld, who was in Detroit promoting the supercar. Featuring a twin- turbocharged V-6 engine and a three-electric motor hybrid system, it promises total power output of more than 550 horsepower. In a video before the car was revealed, Seinfeld and fellow comedian Jay Leno joked about who would be getting the first one. The NSX can run in four modes that offer different performances, as well as variations in the engine’s sound level. A team of 100 workers will build the car in Marysville, Ohio. Acura plans to start accepting orders starting this summer and the first NSXs are expected to be on the road later in the year. The starting price is seen in the mid- $150,000 range.

— ALFA ROMEO 4C SPIDER: A convertible version of the 4C coupe with a removable carbon-fiber hard top. It has a 1.75-liter turbocharged engine that puts out 237 horsepower mated to a six-speed dualclutch transmission. The Spider and the 4C will be difficult to get. FiatChrysler says only 3,000 will be built by hand in Italy, and fewer than half of those will be convertibles. Pricing hasn’t been announced, but expect the Spider to run between $60,000 and $85,000. 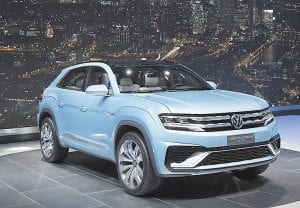 — PORSCHE 911 TARGA 4 GTS and CAYENNE TURBO S: Porsche unveiled a pair of new offerings, including the 911 Targa 4 GTS that packs 430 horsepower and promises zero-to-60 mph acceleration in 4.1 seconds — a hair faster than the current Targa S model. The sports car maker also showed off a Turbo S version of its Cayenne that it says completes the new range of offerings of the SUV, bringing 507 horsepower to the table.

— VOLKSWAGEN CROSS COUPE GTE CONCEPT: It’s Volkswagen’s third concept previewing a seven-passenger midsize SUV. The goal is to start producing it in the U.S. at the end of 2016. Volkswagen says the five-passenger plug-in hybrid Crosse Coupe GTE, with its upscale, muscular design gives the clearest idea yet of the SUV’s styling. Among its most prominent features is a wide, aluminum-framed air inlet below a narrow, twobar grille. Under the hood is a 276-horsepower 3.6-liter V6 and two electric motors, which can power the car in electric mode for up to 20 miles or can combine with the gas engine for a total of 355 horsepower.

— MERCEDES GLE450 AMG SPORT COUPE/ AMG GLE63 COUPE: Mercedes takes on the BMW X6 SUV with its four- door GLE Coupe, a crossover version of the midsize E-Class sedan. It has a coupe-like roofline and a wide, tough stance. In the U.S., the GLE 450 AMG 4Matic Coupe will go on sale with a 362-horsepower V6, a nine-speed transmission and all-wheel drive. It’s Mercedes’ first AMG sports model, and promises features such as variable controls depending on road conditions at a lower price point than the traditional AMG. At the top of the line is the Mercedes-AMG GLE63 S Coupe, powered by a 577-horsepower, 5.5-liter V8. Look for both versions in the U.S. in August.

— MERCEDES- BENZ F015 CONCEPT, C450 AMG 4MATIC, C350 PLUG-IN HYBRID: Mercedes is taking the idea of a self-driving car to a new, luxurious level with the F015. The car resembles a silver capsule and made its debut at the consumer electronics show in Las Vegas. It’s on display in Detroit as the automaker pushes into what Dieter Zetsche, leader of Mercedes-Benz, calls “the hottest next wave” in the auto industry. The roomy, lounge-like interior is loaded with high- resolution touch screens and offers an adjustable seating system with four rotating chairs that allow the occupants to sit face to face (like in the days of horse-drawn carriages, Zetsche notes).

— INFINITI Q60 CONCEPT: Infiniti previewed the design of its upcoming Q60 coupe with a concept car. It’s got sharper, more precise styling than the current Q60, along with a more aggressive grille and narrowed headlights. Infinit says the Q60 that will go on sale next year will be strongly influenced by the Q60 concept. With sales lagging, Nissan’s luxury brand could use the boost.