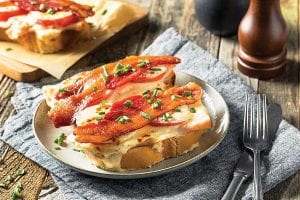 HOT BROWN SLIDER— If you’re looking to feed a crowd, these slider versions of the traditional Hot Brown sandwich are the perfect party-sized bites.

I was “Netflix and chilling” one evening when I discovered an exciting new docuseries called “7 Days Out.” It provides an intimate look at the excitement and drama of the seven days leading up to significant historical and cultural events, including the Westminster Dog Show, Chanel’s Haute Couture fashion show and the “League of Legends” esports gaming championship (www.netflix.com/ title/80207124).

My favorite event profile was the Kentucky Derby, held on the first Saturday in May. The horse race also is known as “The Run for the Roses” and “the most exciting two minutes in sports.” The documentary showcases all the glitz and glamour that are a signature part of horse racing, as well as the blood, sweat and tears behind the scenes.

The Kentucky Derby’s long history began in 1872, when Meriwether Lewis Clark, the grandson of William Clark (of the famed explorer pair Lewis and Clark) traveled to Europe. While there, he attended the Epsom Derby in England, a well-known horse race in operation since 1780, and the French Grand Prix de Paris Longchamps horse race.

Clark returned home determined to create a spectacular horse-racing event in America. His uncles, John and Henry Churchill, gave him enough land to develop a racetrack in Kentucky. Clark and his newly organized horse-racing club raised enough funds to build a permanent racetrack in Louisville. On May 17, 1875, the racetrack opened its gates and the Louisville Jockey Club sponsored the very first Kentucky Derby.

Fifteen 3-year-old thoroughbred horses raced one and a half miles in front of 10,000 cheering spectators. Aristides was the first winner of the Kentucky Derby. Today, the Kentucky Derby is the longest running sporting event in the United States.

If you can’t make it to Kentucky this year, why not host your own Derby party? Since the races are brief, you might want to show the “7 Days Out” Kentucky Debry docuseries before the race, and the award-winning movie “Secretariat” afterward. It’s the inspiring story of a beautiful horse who won the Kentucky Derby in 1973 with the fastest finishing time to date, 1:59:40. Secretariat also went on to win horse racing’s fabled Triple Crown.

There’s nothing like finishing your Derby Day Party with an iconic Kentucky recipe, like this crowdpleasing slider version of the traditional Hot Brown Sandwich. This open-faced sandwich was created by Fred K. Schmidt in 1926 and was first served at Louisville’s historic Brown Hotel.

The Hot Brown is made with turkey and bacon, covered with Mornay sauce, and baked or broiled until the bread is crisp and the sauce begins to brown. Some Hot Browns also include ham with the turkey, and either pimento cheese or tomatoes layered over the sauce.

If you’re looking to feed a crowd, these slider versions of the traditional hot-brown sandwich are the perfect party-sized bites.

1. In a 2-quart saucepan, melt 1-1/2 tablespoons of butter and slowly whisk in the flour to make a roux. Cook the roux for 2 minutes over medium-low heat, stirring frequently.

2. Remove the pan from the heat. Whisk the heavy cream into the roux. Place the pan back over medium heat, stirring occasionally, until the cream begins to simmer, about 2-3 minutes. Remove sauce from heat again and slowly whisk in Pecorino-Romano cheese. Stir in salt and pepper, nutmeg and cayenne. Remove from heat and set aside.

3. Place the garlic and the 1/4 cup of butter into a small saucepan over medium heat until butter is melted.

5. Cover with foil and bake at 350 F for 10 minutes. Remove foil and sprinkle with additional Pecorino Romano. Bake for 2 minutes. Sprinkle with parsley. Cut into individual sliders. Serve with the remaining cheese sauce for dipping. Serves 12.

Angela Shelf Medearis is an award-winning children’s author, culinary historian and the author of seven cookbooks. Her new cookbook is “The Kitchen Diva’s Diabetic Cookbook.” Her website is www.divapro.com.