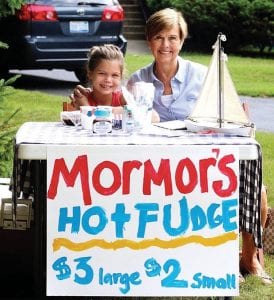 If you open Nancy Nyberg’s fridge door in Naperville, Illinois, you eye her delectable homemade fudge sauce in neatly stacked jars in the back corner.

No wonder her four grandkids think she is the sweetest grandmother ever. Her signature “Heavenly Hot Fudge Sauce,” which she has been making for 20 years, is now affectionately renamed “Mormor’s Hot Fudge” (“mormor” is Swedish for “grandmother”).

Granddaughter Paige, 9, makes it with Nancy to sell annually at a country fair by their summer place in Bethany Beach, Michigan. “She learns how to measure, pour and stir until the sauce is ‘just right,’” says Nancy.

There’s a bit of finance that goes into the mix, too. “We shop together and figure out how much each jar should sell for to cover costs, with enough left over to give to a nonprofit project. We have fun learning and cooking together. It’s really more about the relationship building with my granddaughter than the fudge sauce,” she says.

Here’s the recipe to make 1 quart of hot fudge sauce with steps to involve school-age kids.

1. Let kids break up chocolate and

place in the top of a double boiler with
the butter. Stir until melted together.
Add salt.
2. Stir in sugar gradually, making
sure it is completely blended before
making another addition. Mixture will
become very thick and dry.
Stir in evaporated milk, a little at
a time. (Shake the can well before
adding.) Continue to cook about 10
minutes to blend the flavors and dissolve the sugar.
3. An adult should remove from the
heat and set on a trivet. Add vanilla and
stir. Serve warm over ice cream.
TIP: To store in containers: Pour
into a quart-size measuring cup with
spout and pour into storage containers
such as Mason jars. Keep refrigerated.
“Donna’s Day” is airing on public
television nationwide.
©2018 Donna Erickson