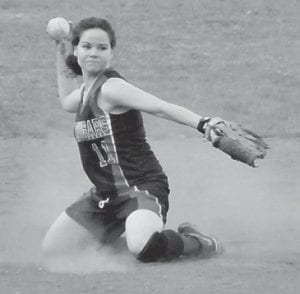 Letcher Central shortstop Chloe Wynn fired from the knees after fielding a ground ball in LCC’s 5-3 win over Belfry Monday evening. The Lady Cougars improved to 3-0 on the season. (Photo by Chris Anderson)

Letcher Central’s defense was tested in the top of the first inning of last Friday’s game when Sheldon Clark High School loaded the bases after a single, and a mental error and dropped ball by the Lady Cougars.

The girls stepped up and played a solid defense throughout the rest of the inning and game. Junior third baseman Micca Boggs got the force out at home, junior Adiah Cook struck out the next batter, and Boggs caught a pop up at third to get the team out of the inning.

After having five of the first six batters striking out, coach Bumper Adams gave the hitters words of wisdom. They must have listened. Junior Hailey Caudill started the bottom of the third with a double. After the next girl got out, senior Katey Mynster laid a bunt down the third base line and made it safely to first and moved Caudill to third. With Mynster stealing second and Caudill on third, junior Chloe Wynn hit a high fly ball to center, scoring Caudill. Freshman Emily Blair moved Mynster to third on single to center. The next batter, junior Lisa Frazier, singled to center, scoring Mynster and Blair and giving the Lady Cougars a 3-0 lead. 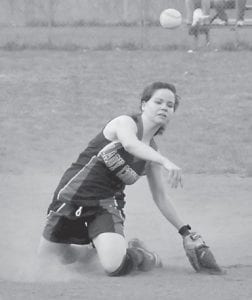 Sheldon Clark got on the board the next inning when T. Ward hit a 2-out double into deep left field, scoring B. Young from first. Letcher Central had opportunities to score in the bottom of the fifth. Mynster was thrown out in a close play at the plate and in the bottom of the sixth, Frazier was left on third after starting the inning with a single. Cook had another outstanding game, holding the Cardinals to one run and four hits, while striking out three.

Letcher Central (2-0) was to host Belfry Monday and Cordia Tuesday and travel to Hazard on Friday.

After a week of waiting because of rain cancellations, the Letcher County Lady Cougars finally got on the field. LCCHS traveled to Leslie County to take on the Lady Eagles.

The Lady Cougars got on the board at the top of the first when junior Chloe Wynn beat out a third strike to first base. She scored on a fielding error by the pitcher.

In the second inning, the Lady Cougars pushed their lead to 2-0 when senior Katey Mynster got on base by a dropped ball by the third baseman and scored on a triple by freshman Emily Blair.

The top of the third, the girls got the bats going. Junior Micca Boggs started the inning off with a single. Sophomore Amelia Shepherd walked. Both Boggs and Shepherd scored on a fielder’s choice. With two outs, senior Latisha Potter hit a doubled and scored on Mynster’s single. Wynn and Blair drew walks to load the bases. Frazier singled in Mynster, and the next batter, Micca Boggs, got her second hit in the inning. Wynn and Blair came in to score, giving the Lady Cougars a 9-0 lead.

The Cougars got four more runs in the fourth by eight-grader Kaitlin Creech, Mynster, Wynn and freshman Megan Miller.

The Lady Cougars tacked on one more run in the fifth by sophomore Annie Boggs, giving the Cougars a 14-0 five-inning victory. Lady Cougars junior Adiah Cook held the Eagles to three hits and struck out four. The Lady Cougars, with a very much-improved defense, committed no errors.