City moves a step closer to qualifying for needed grant of $5.2 million 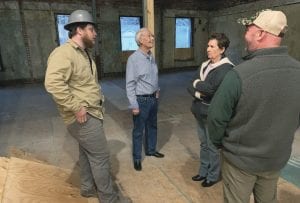 Above, Whitesburg Mayor James W. Craft, second from left, was among the city offi cials who visited the old hotel last week.

The next step for the City of Whitesburg to qualify for a $5.2 million grant from the U.S. Economic Development Authority is now complete.

If awarded, the grant would mostly finish the restoration work on the Daniel Boone Hotel.

At the beginning of last week’s city council meeting, Mayor James Wiley Craft called a recess just after the meeting was called in order to allow the council members to visit the hotel while there was still enough daylight. Craft said all three floors have been installed and while there is still some work to do, he was told it would be safe for them to visit and climb the stairs. When the council returned, everyone was pleased with the work that has been done.

Paul Nesbitt of Nesbitt Engineering, who works with the city on infrastructure and funding, told the council that a preliminary architect’s report from B&D Design of Lexington has been submitted to the EDA in support of the grant. He said the report in necessary for the project to be eligible for the funding.

Nesbitt said that the big news for the city is the two large grants of $1.3 million for water line and tank replacement and $101,239 for a splash park for the city swimming pool that were announced during Gov. Andy Beshear’s visit to Whitesburg March 2. Nesbitt said the next step in upgrading water and sewer infrastructure will be to address problems of the influx of water from rainwater and storm sewers that goes into the city’s wastewater plant.

Councilman Mike Jackson also asked the council to support a $1.5 million Appalachian Regional Commission Power Grant, that the Board of Directors of Mountain Comprehensive Health Care voted on the following Tuesday (yesterday). The grant is for a project titled “Transitioning from Recovery to Society” and will serve Letcher County as well as Perry, Knott, Harlan, and Pike counties. With the funds, MCHC plans to renovate the old Whitesburg High School English building to create transitional housing for men recovering from addiction.

The project addresses the ARC’s Strategic Investment Goal of a Ready Workforce, and will allow MCHC to provide a supportive environment for men in recovery, rather than returning them to the often-toxic environments that spawned their addiction.

The renovations will involve converting classrooms in the 14,000 square foot English building into 22 efficiency apartments. Substance abuse disorder treatment facilities and local law enforcement will partner with MCHC to provide the men with a place to live while they continue their journey to recovery. The facility will provide outpatient treatment, job training, life skills training, and sober recreation activities. The council voted four to zero to support the grant, when it was submitted. Councilman Jackson, who works for MCHC, did not vote.