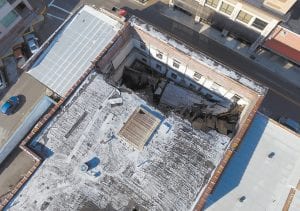 FALLING DOWN — The roof of the Daniel Boone Hotel building in Whitesburg collapsed last week, one day before a structural engineer was hired to determine how to save the nearly century-old building.

The timing was impeccable, though unintended.

Then there was a crash.

Finally, there was a bigger crash.

The front quarter of the hotel roof collapsed, taking the third floor, the second floor and part of the first floor with it. The sky is now visible through the front windows of the three-story brick building — the windows that remain, that is. A few of the windows on the first floor of the old building were broken during the collapse, leaving rotted floor boards, and nearly century-old tin ceiling grids sticking out over the basement stairs in the Main Street sidewalk.

Yellow caution tape now surrounds the front of the building, which has been empty since about 1999.

Bill Richardson, the architect contracted to design renovations of the hotel building, said the interior of the building had to be gutted anyway, but the collapse wasn’t the ideal way to go about it. 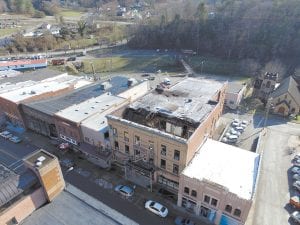 The Daniel Boone Hotel building and its crumbling roof can be seen on Whitesburg’s Main Street.

The council voted on Thursday to hire Pogue Engineers and Associates of Lexington, a structural engineering firm, to determine how to best shore up and renovate the building. Poague will be paid $25,000 for the work, which is expected to take about a month. The immediate danger is the damage from the structural collapse, and Richardson said that study could be completed in as little as two weeks, allowing him to write bid notices for demolition and for shoring up the building.

The city had received about $1 million in grants from the Appalachian Regional Commission to begin work, but about $70,000 of that will be spent on engineering studies. The city has applied for an additional $2.4 million from a pilot project of the federal Abandoned Mine Lands program approved by Congress in 2015. The pilot project, pushed then by local communities, the Obama administration, and Congressman Harold “Hal” Rogers, is intended to boost economic opportunities in areas that have been hard-hit by the decline of the coal industry. The first grants were awarded in 2016.

The current plan is to turn the old building into a boutique hotel. The engineers must first determine whether it’s safe to work in, and if not, how to make it safe.

Richardson’s plan is to add a penthouse to the roof of the hotel and a rooftop event space.

The main floor is expected to have a business center with meeting rooms, a fitness center, and possibly retail and entertainment space. Plans also call for the fire escape to be removed from the front of the building because changes in the building codes no longer require it. The steel canopy to which the escape is attached is an original part of the building, and will remain.

The building is the largest in downtown at about 60 by 160 feet with four floors, including the full basement. Half of the basement is above ground level. When it was opened the first week of July 1920, the Daniel Boone Hotel had cost about $100,000 to build and furnish — about $1.2 million in today’s dollars. At the time, it was a first-class hotel in a town that still had dirt streets and farm animals in downtown. In addition to a hotel, it featured a banquet room where many weddings and meetings were held, a café, a barbershop and offices. An open atrium allowed sunlight from a skylight to reach to the bottom floor.

That skylight is part of the problem now, Richardson said. A pane of glass was broken and allowed water into the building for years, damaging the wooden floors below it. Other leaks had apparently developed as well. The first floor and part of the second floor on one side had already collapsed into the basement by late last year. The roof collapsed last Wednesday, taking down the rest of the floors. The first floor on the east side of the building, where the old lobby and banquet rooms were originally located, the second floor on the same side, and about three-quarters of the floor from the first set of rooms to the back are still in place.

Richardson said he thinks it was lucky that there were windows in the area where building roof collapsed, because it let some of the pressure from the falling debris escape without pushing a wall out.

“You can line up the front façade and it hasn’t bowed out side to side or to the front,” he said.