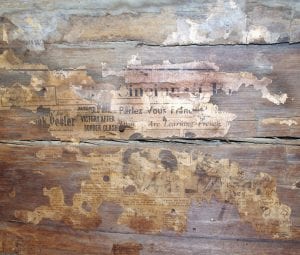 OLD NEWS – This 1936 edition of the Cincinnati Post was used as wallpaper on a wall inside of Artie Ann Bates’s 1875 log house near Blackey. (Photo by Sam Adams)

Construction and demolition equipment should begin showing up next week at the century-old Daniel Boone Hotel in Whitesburg.

Structural Systems Repair Group of Cincinnati was the successful bidder last month, and had until August 1 to begin mobilizing to work on the building, the roof of which collapsed last year. Pavement markings outlining the area within which the work will take place appeared just over a week ago, and the company has rented an apartment in Whitesburg for employees to live in during the course of the project. Architect Bill Richardson said the crew that will do the Whitesburg project is finishing a job in Indiana, and will be moving here soon.

Mayor James Wiley Craft said workers are supposed to be moving equipment into the parking lot beside the hotel on Monday, and will begin removing a 12- foot section of basement wall the following Monday to allow them access to the building with small frontend loaders.

The million-dollar project will remove debris from the roof and floor collapse, shore up what’s left of the building and build back floors, bearing walls and the roof. The city will seek more money in October to continue building a “boutique hotel” inside the shell of the old building. The first floor and basement of the Daniel Boone will be used for commercial space of some type.

The term “boutique hotel” refers to a small, stylish hotel that often combines historic details with upscale, modern or quirky style. U.S. News and World Report says boutique hotels are characterized by smaller size, personalized service and local personality. With 42 rooms, the Daniel Boone Hotel will fall in the middle range of boutique hotels, which are normally considered to have between 10 and 100 rooms.

Craft said the Daniel Boone will be “very much like” the Inn at Wise, a boutique hotel in nearby Wise, Va.

SSRG, the company doing the first phase of the work, has been involved in many of the historic renovations in the Over-The-Rhine District in Cincinnati, one of the largest historic districts in the country with 1,200 buildings built mostly between 1865 and the 1880s. Its previous projects in Over-The-Rhine include Cincinnati Music Hall, Cincinnatian Hotel, and St. Paul’s German Evangelical Church. Richardson said SSRG has done well over 100 renovations of historic buildings. Others include the Stuart Opera House in Nelsonville, Ohio, and the Clark County Courthouse in Winchester.

The second phase of the project, which has not yet been funded, is expected to cost $2.5 million and will build the hotel to “white box” status, ready for plumbing and lighting fixtures to be installed and finishes applied.