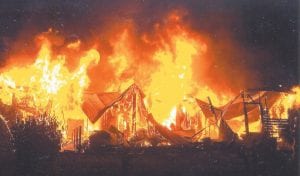 Flames created an eerie scene at Whitco Sunday night when an elderly woman’s house burned out of control. Although the Sandlick and Whitesburg fire departments contained a fire at the home earlier in the day, there was little they could do after it reignited. The woman was not in the home at the time of the fire and was not injured.