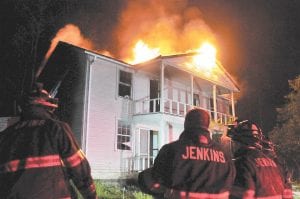 — Jenkins firefighters stand near a two-story house that was destoyed by fire late Tuesday evening. The fire spread through the attic of the Cane Branch structure, prompting firefighters to evacuate and fight the fire largely from the outside. Jenkins Volunteer Fire Department Chief Rick Corbett said the fire was probably caused by an electrical problem. The house was unoccupied. (Photo by Chris Anderson)