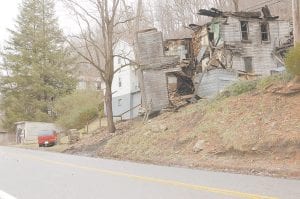 ROAD HAZARD – The remains of an old coal camp house located between Jenkins and Dunham are creating a traffic hazard on Kentucky Highway 805, which was covered by debris last week after the structure started sliding down the hillside.

Jenkins city officials have received permission to tear down an abandoned house which has been spilling debris onto a busy state highway between downtown Jenkins and Dunham.

The house began to collapse on the afternoon of Feb. 6. As it began to slide off of its foundation, the roof on the left front of the house caved in and caused bricks from the chimney to spilled onto both lanes of Kentucky Highway 805. The collapse was so powerful that bricks were also thrown onto an access road that connects KY 805 with the Mudtown community in Jenkins.

Because Jenkins has no ordinance governing how to deal with property that has become so blighted and deteriorated it is a health and public safety emergency, city officials were not legally able to begin working on the house immediately. The structure is located near KY 805’s intersection with new U.S. 23.

“Our first instinct was to just tear it down, but we couldn’t do that,” said Jenkins Police Chief Jim Stephens. “We want to get it taken care of and we’ve been following the steps, but there was nothing else legally we could do.”

Stephens said the home is owned by former Jenkins resident Randy Cornett, who now lives in Lawrenceburg. Stephens said city officials were unable to locate Cornett until Monday morning, at which time he gave permission to demolish the home.

“In many cases such as these, the property may have been in someone’s family for years and they’ve been given the property or inherited it and may not know about it or it’s condition,” said Stephens. “Then when something like this happens the city has to go through and find out who the property belongs to and it may take a while. But now it before it hurts someone.”

Jenkins Mayor Charles Dixon said that the city is asking the state highway department to help remove the house because it is located on a steep hillside close to the road.

Dixon the issue of blighted and deteriorated property isn’t just a matter of beautifying of the city, but is a matter of public safety Jenkins citizens and anyone else who travels through the city.