How Eula Hall fought for her people 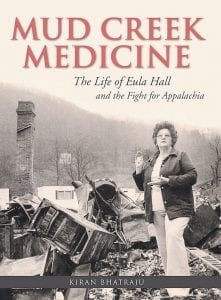 Retired Louisville Courier- Journal editor and current University of Kentucky Board of Trustees member David Hawpe reviews the new book “ Mud Creek Medicine … The Life of Eula Hall and the Fight for Appalachia” by Kiran Bhatraju. The book, published by Butler Books of Louisville, is 280 pages.

I like to tell myself that I have learned a lot about Appalachia over the years. The region and its problems were threads that ran true through my career as a journalist. The Appalachian dilemma remains a challenge in my new role as a university trustee, senior adviser to a state lawmaker and member of the Kentucky Humanities Council and the University Press of Kentucky editorial board.

Looking back over all that I have learned, the one thing I know to be true is that extraordinary people, like Eula Hall — and maybe only such people — can make a difference. Such folks can change the narrative in the beautiful and tragic mountain coalfields. The new book by Kiran Bhatraju — “Mud Creek Medicine…The Life of Eula Hall and the Fight for Appalachia” – introduces you to one such person.

As a young reporter I watched Eula square off against establishment bureaucrat Harry Eastburn, who ran the local community action program that was part of the federal War on Poverty. Her finger wagged in his face. Her trademark mass of upswept hair swayed back and forth. She was fierce, fearless and formidable.

Bhatraju gives readers that Eula, who by force of will built a model rural health care delivery system in an absurdly underserved part of the Big Sandy River Valley and earned not only the gratitude of her neighbors but a wall full of local and national awards. More importantly, the author shares something that one only sees close up, and over time — the gentle and generous soul inside the stiff-necked advocate.

There are glitches in this book: confusing references to interstate roads when no interstate has been built through the Big Sandy; a note about “Barboursville” with an erroneous “s”; mention of a “county attorney” who I believe actually was Pike Commonwealth’s Attorney Thomas Ratliff ; an assertion that Pike and Floyd counties “served as the economic and political hub of the eastern region,” which would have been clearer if differentiated from Hazard as center of the Kentucky River coalfield and Harlan as core of the Cumberland River field. These are nits, but what’s not inconsequential is the author’s mention that “Eula resented the fact (rural mountain boys) had to go (off to serve in World War II) while the children of the privileged in town would be spared.” Sons of privilege in Pikeville and Prestonsburg, like my father and uncles, and others in Appalachian county seat towns, were indeed called to serve, which I wish Bhatraju had mentioned in a footnote.

Nits aside, this is a must read book for those who want to know what might work in solving Central Appalachia’s many interrelated problems. One answer is private and public support for those local heroes and heroines, like Eula, who understand their people and place and offer ideas that might change things for the better.

Bhatraju understands this region, where he was reared. He gets it right. More important, since this is a book about Eula Hall, he gets her right. He describes her activism against the backdrop of a life story marked by poverty, desperation, abuse and disappointment, but also by love … of family, of community and of challenge.

There have been other local heroes — mountain folks who rose out of Appalachia and made a difference, including politicians such as Bert Combs, Carl Perkins and the extraordinary Paul Patton who achieved mightily at both the local and state levels, as well as Floyd County’s Greg Stumbo, who as speaker of the state House of Representative is a bulwark against regressive legislative plots and plans, and Clay County’s Robert Stivers, who as senate president has changed that body much for the better. The list is longer than the folks who stereotype Appalachia realize, including as it does the names of activists like strip mine opponents Dan Gibson, Jink Ray and the Widow Combs, Joe and Gaynell Begley from Blackey, the exceptional educator Mike Mullins and the “Knott County Mafia” including education champion Lois Combs, the courageous and deeply insightful journalists Tom and Pat Gish from Letcher County and The Mountain Eagle, and mental health exponent Louise Howell from a Breathitt County political dynasty.

Of course outsiders also came and stayed and made a difference — “fotched-on” folks like Bill and Josephine Richardson who created the celebrated Appalshop and a restaurant and mountain crafts enterprise in Whitesburg. In Eula’s case, she had crucial help from outsiders John Rosenberg, the incomparable legal services champion, and his wife, Jean, who worked to support single-parent homemakers.

But Eula Hall herself is singular … one of a kind. Born on Upper Greasy Creek in Pike County, she ultimately found herself celebrated in places like New York City and Washington, D.C., for working to help her neighbors on Mud Creek. She refused to run a mere health care referral service for them, especially since so many didn’t have the money to pay for the help they were sent elsewhere to get. “By coming into their homes,” the author observes, “scheduling their appointments, teaching basic health education, and giving them transportation, she was providing end-to-end service. Keeping anyone from falling through the cracks.” By reaching out in such a way, “Eula was pioneering a form of community health engagement never before seen in the mountains.”

Her antagonists tried to push her out and burn her out, but the Mud Creek Clinic survived and flourished.