How KFC became a huge success 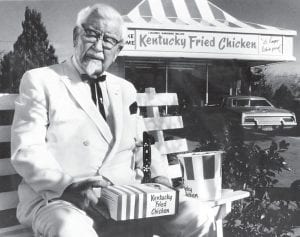 Fifty years ago, Kentucky Fried Chicken was just a menu item sold at 600 North American restaurants. The savory supper created by a white-haired Southern septuagenarian in a snow-white suit and black string tie hadn’t yet become the stuff of legend.

And had the cornpone character known as Colonel Sanders not sold his chicken-breading blend of 11 herbs and spices to men who built it into a restaurant brand, most anyone alive today might never have tasted it.

“It’s still one of the greatest entrepreneurial stories ever told,” said Brown, governor of Kentucky governor from 1979 to 1983, and a longtime Lexington resident. “The Colonel’s story is as good a Horatio Alger story as you can get, and KFC was a business idea whose time had come.” 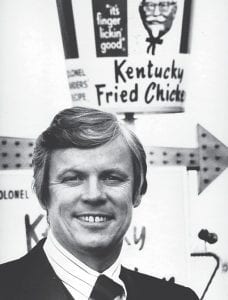 Ironically, it was I-75, one of Lexington’s most significant thoroughfares, that drove Sanders out of Corbin and on the road to promote his chicken. Its early-1950s construction diverted traffic away from Harland Sanders Café on U.S. 25, leading its determined owner to sell the business and find a new income stream.

At 65, Sanders crisscrossed North America in a white Cadillac, its trunk full of stove-top pressure cookers, and peddled chicken franchises to existing restaurateurs. For every whole chicken they fried in his special breading, they paid him a five-cent royalty. By 1963, Sanders had licensed 600 restaurants in Canada and the United States to use his recipe.

He and Brown met when Sanders asked the 29-year-old attorney for help with real estate deals he planned to make selling a barbecue franchise. The confident Brown told him, “I was a good salesman and a lawyer, and that I could do franchising and sales. But I said I’d never done much in real estate.”

During their meeting, Sanders showed Brown a file folder of royalty checks that convinced Brown the Colonel’s fried-chicken business, not his barbecue franchise, was the real opportunity.

The following day, Brown revisited the Colonel at his wife’s restaurant, Claudia Sanders Dinner House in Shelbyville, Ky., and ordered the fried chicken.

“I thought, ‘My God, this is great!’” Brown recalled. “Plus, I loved the idea of the man in the white suit. I saw the whole thing was an incredible business opportunity.”

A few months passed before Brown and Massey formally approached Sanders about buying his business. Initially reluctant to discuss a sale, Sanders set the price at $2 million, which the men agreed was fair.

According to Brown, Sanders’ hesitance returned as relatives tried convincing him that Brown and Massey wanted to push him out and change his chicken recipe. The hot air and hubbub stalled the deal for weeks.

Frustrated but clever, the wellconnected Brown called Barry Bingham Sr., then publisher of The Courier-Journal, to say he and Massey had a contract to buy Kentucky Fried Chicken. Recognizing a good story, Bingham had a photographer take a picture of Sanders and Brown and placed it with a story about the coming sale. Seeing the notion in print moved Sanders to close the transaction.

“I think the Colonel liked the national recognition it gave him,” Brown said. “It told his licensees and everyone else that the deal was real.”

The best part of the story, Brown said, was hearing “after we closed the deal, the Colonel told his Rotary Club how he took two city slickers for $2 million.”

Knowing KFC had to grow quickly to dominate the market, Brown prepared the company for a public offering. To boost KFC’s value, Brown needed corporate stores, and to acquire them, he convinced franchisees to trade their restaurants for stock options rather than cash.

The sales pitch worked and he took the company public in 1966. Soon after, the stock price soared, split multiple times and quickly turned a few dozen former franchisees into millionaires.

“We had been buying franchisees’ stores back for five times earnings, but at one point, the stock was trading at 70 times earnings,” said Brown, who moved the company to Louisville that year.

Brown also offered Sanders stock in the company, but he rejected it.

“You can’t blame a guy born in 1890, who’d had the hard life he had, and then survived the Great Depression, for not trusting stock,” Brown said. “But it kind of made me sad for him because I knew it would do well.”

Many of the franchisees who sold to Brown joined the company as market developers, and from 1966 to 1971, they opened an astonishing 3,500 take-home stores, including a dizzying 863 units in 1968 alone. The restaurant industry had never witnessed such an opening blitz, and such numbers weren’t tallied again until Subway’s growth spurt a quartercentury later.

As the brand rolled out, Brown got Sanders on television. In the course of 31 national TV appearances, Sanders appeared on “What’s My Line?” and Johnny Carson’s “The Tonight Show.” He even danced on “The Lawrence Welk Show.” According to Brown, store sales rose 10 percent when Sanders was on TV.

“Oh, he was mad, so mad about what they were doing, especially when it came to the gravy,” Dunford said. “He was a perfectionist about that — about everything, really.”

Sanders sued Heublein in 1973, alleging it misused his image and promoted products that weren’t his. When he complained bitterly to The Wall Street Journal and likened KFC’s gravy to “wallpaper paste,” Heublein removed him as spokesman and sued him for libel in 1975.

Though Brown left the company in 1973, he helped end the feud by convincing Sanders he would lose in court.

“I told him I’d have to testify against him, and I didn’t want to do that,” Brown said. He also persuaded Heublein to reinstate the Colonel as brand ambassador and provide him a small salary.

“It was the honorable thing to do for both parties,” Brown said.

Five years later, Sanders was dead from leukemia at age 90. The company he created was still growing, but the relationship between Heublein and KFC’s franchisees continued deteriorating.

When R.J. Reynolds acquired Heublein in 1982, former KFC president Don Doyle said Reynolds didn’t “quite knew what to do with us. We became a very small division of a massive tobacco company.”

KFC’s greatest challenge came when PepsiCo bought it from R.J. Reynolds for $850 million in 1986. (The soda giant already owned Taco Bell and Pizza Hut.) KFC’s franchisees strongly disliked being managed by another non-restaurant company, and their discontent boiled over into a lawsuit against PepsiCo for alleged breach of contract. It took the 1996 appointment of David Novak as chief executive and president of KFC North America to settle the lawsuit.

A year later, PepsiCo spun off all three restaurant chains under the banner of Tricon Global Brands, later renamed Yum! Brands. (Novak is CEO and chairman of the company.)

Better suited as part of a restaurant-only company, KFC still faced other battles. Animal cruelty allegations leveled by the People for the Ethical Treatment of Animals (PETA) and highcalorie criticism raised by the Center for Science in the Public Interest cast a negative light on the company.

Did Brown ever imagine KFC would become such a large company? He said no one could have at the outset. Yet he never doubted the chain would become a giant.

“When you saw the lines coming out of those carryout units back in the early days, you knew we were on to something really unique, something significant,” he said. “Fact is we owe it all to the Colonel. I’ve said for years that he never gets enough credit for what he created.”