How much coal has left Letcher? What’s still here?

By SAM ADAMS and BEN GISH 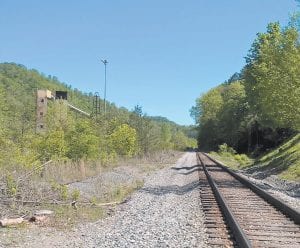 This old South-East Coal Company tipple located beside tracks owned by the L&N Railroad at Isom was once among the top movers of coal in Letcher County, where more than 605 million tons of coal have been mined since 1900. (Photo by Sam Adams)

If all the coal mined in Letcher County since 1900 were loaded onto 100-ton rail cars, the coal train would reach from Whitesburg to Los Angeles more than 22 times.

It would reach around the world at the Equator twice, and still reach from Rio De Janeiro, Brazil, on the east coast of South America to Lima, Peru, on the west coast.

The coal would also weigh 1,659 times as much as the Empire State Building.

Between 1900 and 2014, Letcher County coal mines produced 605,891,760 tons of top-quality coal, most of it used to power steel mills and other industries in the United States. Based on today’s lowest price for Central Appalachia Coal sold to power plants, all the coal mined in Letcher County would be worth a minimum of $31.74 billion. Based on today’s prices for higher-grade metallurgical coal used in the manufacturing of steel, which recently stood at $162.50 per ton, all of the coal mined in Letcher would have generated $98.4 billion. 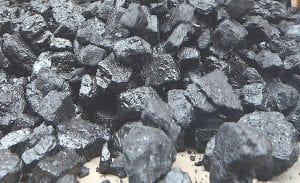 BLACK GOLD — If all the coal mined in Letcher County since 1900 was loaded onto a single train of 100-ton rail cars known as “gons,” the train would reach around the Earth twice at the Equator and the coal on it would be worth as much as $98.4 billion. (AP Photo)

Now, the mineable coal — and the money that came with it — is almost gone.

Brown, who worked for 39 years as a surveyor and mapmaker for R.R. Crawford Engineering, said most of the coal left is in the Cumberland River area, but it has been heavily mined over the past few years. He said there’s still some mineable coal in the Carbon Glow area that is being mined from Knott County, and a little at Jenkins.

“All you’ve got left for stripping is little contour jobs,” he said.

The unmined minerals tax on coal in Letcher County declined to $303,865 this year, down from $1,767,606 last year. According to the state Revenue Cabinet in Frankfort, that decline is because there’s no demand for coal, and that means its value is lower.

“We normally get about $40,000 for our part,” said Letcher County Sheriff Danny Webb, whose office gets a 4 percent fee for collecting taxes. “If we collect all these taxes, we’ll get about $12,000. So you see what that’s done to the sheriff ’s office.”

So just how much coal is left in Letcher County?

“ You’ve asked the $64,000 question, for which there is no good answer,” said Brandon Nuttall, a geologist with the Kentucky Geological Survey at the University of Kentucky.

Nuttall said there are two ways to look at how much coal is left — resource and reserve. “Resource” is how much coal really is left in the ground, and the KGS has a pretty good estimate of that from core samples taken around the region. The other way to look at it is “reserve,” which is not how much is left, but how much can still be mined.

“Because of changing economic conditions, we have no earthly idea what a reserve might be,” Nuttall said.

The KGS doesn’t consider any coal less than 28 inches thick to be mineable, so it takes all of that out of the resource number immediately. Then it subtracts what geologists think has already been mined. That can be a squishy number, too, since no one really knows where all the old mine maps are, and there’s no guarantee that some companies didn’t go beyond their boundaries and fail to report it.

In 2014, the KGS determined the “resource” left in Letcher County was about 2.6 billion tons, but most of that is not mineable. Calculating what is not mineable, and subtracting about 2 million tons mined in the three years since the last estimate, and KGS arrives an estimate of 950-960 million mineable tons left. The question is, how much is economically mineable.

“That last question is of course the most important one,” said Jerry Weisenfluh, associate director of the KGS.

Economics, he said, has more to do with coal quality and coal demand, and those are questions the KGS can’t answer. It’s something individual mining companies track, but KGS doesn’t.

“Eastern Kentucky coal is, on average, lower sulfur than coal from western Kentucky and the Illinois Basin, but most power plants have scrubbers now and there’s no need to buy low sulfur coal and pay that premium.”

Even given the demand issues and the drop in production, Weisenfluh, like others interviewed, it was “a mystery” how property taxes on unmined coal could drop 83 percent in a single year, as it did this year in Letcher County.

“I’m kind of surprised it would go down that quickly,” he said.

In the past year, the county has shut down senior citizens centers, turned the remainder of the program over the Kentucky River Area Development District, laid off employees, taken away take-home cars, and furloughed employees deemed too essential to lay-off. Those employees will take off without pay between one and three days per two-week pay period. The cuts reflect the loss of mineral property taxes (tax on the value of minerals still in the ground), and the loss of mineral severance taxes (an excise tax on the value of minerals that have been sold).

“ That money built Frankfort, Lexington, Louisville, it built their roads, and we didn’t get anything. You’ve got to blame our local leadership some,” he said. “You’d think somebody would have stood up before now and said, ‘We’ve got to do something.’”

“We should have the best roads and the best of everything,” Sergent added.

Joe Childers, a Lexington attorney who grew up in Pike County, did a study of absentee landownership in the early 1980s, and a lawsuit he filed forced the state in 1988 to begin taxing unmined minerals. Unmined minerals tax is a property tax similar to what someone would pay on his or her home. Severance tax is a 4.5 percent sales tax. While different, severance tax has been an issue for counties as well – in part because most has been sent to other parts of Kentucky rather than being returned to coal counties, and in part because it’s running out, too.

“I lay it at the feet of a lot of those local officials. They had all of this coal severance tax money, they had it for 40 years, and they wasted it. They didn’t set any of it aside for the future. That’s always been a thorn in my side,” Childers said. “ The severance tax was meant for the time when the coal was gone. Well, now the coal’s almost gone and there’s no money.”

In 2009, the US Geological Survey published the National Coal Assessment, which predicted that production of coal from the Appalachian Basin would gradually increase for about a decade, and then plunge as economically mineable coal was depleted.

“I can agree with that,” Brown said. “It’s all crap coal left in Letcher County.”

Though the study was widely disseminated, there were no large-scale efforts to address its prediction.

As one county official was left wondering after learning how much coal has been taken out of the county: “Why doesn’t Dunham look like Dubai?”