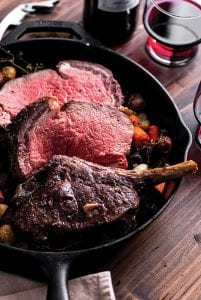 Nothing says “celebration” like a ridiculously expensive piece of meat. Well, that’s not really true, but this is the time of year for splurging, in dollars and eating.

And with apologies to all the vegetarians out there, few things are as impressive an anchor to a festive meal than a top cut of meat.

Even if you’re buying a traditionally produced piece of meat, the price can be high. So, you do NOT want to mess this up.

It can be nerve-wracking cooking a piece of meat on which you spent a small fortune. Some tips from the experts:

For expensive, large cuts of meat, roasting is usually the answer. The dry heat method caramelizes the exterior and allows for even cooking throughout.

“We use classic roasting techniques, i.e. no sous vide or other New Age methods,” says Michael Lomonaco, who knows his way around pricey cuts of meat as chef and partner of Porter House Bar and Grill in New York.

Don’t complicate things during the holidays, he adds; he opts for a timeless prime rib.

Fat is your friend when it comes to splurgey cuts of meat. That’s why Antimo DiMeo, executive chef of Bardea Food and Drink in Wilmington, Delaware, also likes prime rib for the holidays.

“It provides a lot of great fat marbling that responds well to slow roasting,’’ he says.

Lomonaco suggests placing the roast fat side up so the fat bastes the meat as it cooks. Pick a cut with a generous amount of fat, and ask your butcher to help you pick the choicest one.

BRING THE MEAT TO ROOM TEMPERATURE

That way the outside won’t cook too quickly while the inside is still losing its chill.

Some people sear the meat first, some cook it slow and steady, some switch from high to low heat during roasting. Find a recipe from a reliable source and follow it precisely. And make sure the oven is fully preheated before you put the meat in.

First, use a meat thermometer. It’s really the only way to make sure you’re removing your meat from the oven at exactly the right moment. Insert the internal thermometer into the meat’s thickest point, making sure it’s not touching any bone. There are a variety of internal thermometers available, from ones you can check remotely to instant-read versions.

Lomonaco like to roast his prime rib at 350 degrees F. DiMeo sears his first in a very hot (500 degrees F) oven to give it a nicely browned crust, and then lowers the heat to 350 and cooks it low and slow for 2 to 3 hours (depending on size), basting often to keep it moist and tender. Both chefs pull the meat from the oven when its internal temperature reaches 120 degrees F.

LET THE MEAT REST BEFORE CUTTING

There are two reasons to let the meat sit after cooking. First, for carryover cooking. Second, because the fibers of the protein change while the meat is cooking, and need to relax post-cooking in order to reabsorb the juices. If you’ve ever cut open a leg of lamb or a steak to see perfectly rosy meat and lovely juices, only to have the meat turn tough and grayer a bit later, that’s because you cut into it too early. The juices ran out of the meat onto the cutting board. So be patient.

For a prime rib, for example, Lomonaco says it’s crucial to let it rest for 30 minutes before carving. Smaller cuts of meat don’t need to sit as long — maybe 10 minutes for a 1-1/2-inch-thick steak. Legs of lamb should also sit for 20 to 30 minutes.

So, while paying for the holiday table’s meat might make you gasp, you should breathe easily when serving it up, perfectly cooked, to admiring family and friends.

Katie Workman writes regularly about food for The Associated Press. She has written two cookbooks focused on family-friendly cooking, “Dinner Solved!” and “The Mom 100 Cookbook.” She blogs at www.themom100.com/about-katie-workman. She can be reached at Katie@themom100.com. with them. Tuck the thyme sprigs amidst everything.

Place the roast in the oven and cook for 15 minutes (do not peek at the meat during this time; the high heat needs to be uninterrupted). Turn the heat down to 350°F and continue to roast for 30 minutes until a meat thermometer stuck into the very center of the roast and not near the bone registers 115°F (see Note). Turn the heat back up to 475°F and let it cook for another 10 minutes until it is beautifully browned on the outside. Check the internal temperature again: 125°F is rare, 130°F is medium rare, 135°F is medium rare. You do not want to go above 145°F—it’s kind of a waste of this cut of meat.

Remove the meat from the oven and transfer it to a cutting board; tent the meat with foil to keep it warm. Transfer the vegetables to a serving platter or bowl. Pour off all but one or two tablespoons of the fat from the roasting pan and place the roasting pan over a burner on high heat. Add the wine or broth and stir, scraping up any brown bits, until the liquid is reduced by half, about 7 minutes. Transfer it to a pitcher or bowl with a spoon to pass at the table.

When the roast has sat for 10 minutes to reabsorb the juices, slice it and moisten the meat a bit with some of the pan sauce before serving, then pass the rest of the sauce.

12-rib roast, about 3 to 3-1/2 pounds trimmed of some of the excess fat, at room temperature

6 fresh thyme sprigs or so

Trim the rib roast and tie it up with twine if you like. Season the roast liberally with salt and pepper. Use a small sharp knife to poke small holes all over the meat and insert the garlic slivers into the holes. Place the meat, bone side down, in a roasting pan or large cast iron pan. Toss the carrots, potatoes and onions with the olive oil, season with salt and pepper and surround the roast

Petit filets of beef are tender and lean at the same time, and usually less pricy than a full trimmed tenderloin.

In a zipper top quart-sized bag, combine the grapefruit juice, soy sauce, honey, ginger, garlic, salt and pepper. Add the filets and seal the bag, then marinate in the refrigerator for about 4 hours.

Preheat the oven to 425°F. Heat an oven proof skillet over medium high heat. Add the oil, and turn the pan so the oil coats the bottom of the pan. Sear the fillets on all sides, about 8 minutes in all, watching to make sure they don’t get too brown from the sugar in the honey.

Transfer the pan to the oven (or if you are making a number of them, you might want to transfer them to a larger baking dish), and roast the filets for about 10 to 15 minutes, until the center reaches 150°F. for rare, 160°F. for medium. Remove the pan from the oven, transfer the filets to a cutting board and let them sit for 10 minutes. Slice them as thinly or thickly as you like.