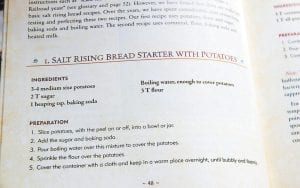 Salt rising bread has a long history in Appalachia. Typically, people outside of the region have never heard of it.

The bread often brings to mind a variety of distinctive scents and grandmothers tending to a time intensive dough in a wood-heated kitchen.

Typically breads require yeast — a leavening agent that makes bread rise, giving it a rounded top. It is what makes it look like bread.

But salt rising bread does not use yeast.

Recipes for the bread date back to the late 1700’s, when pioneer women in the remote mountains of Appalachia figured out another way to make bread — something no one else discovered.

From her kitchen in Harrison County, West Virginia, chef Amy Dawson explained the bread’s connection to Appalachia’s history. “It was common because we were so isolated. There were no easy ways to get to town. There weren’t brewers to get yeast for your bread. It was just through trial and error and a need to get your bread leavened.” 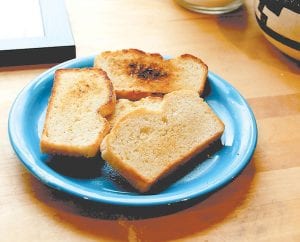 The finished product. A favorite way to eat salt rising bread is toasted with butter. (Photo by Caitlin Tan)

The bread rises only through the cultivation of bacteria — safe bacteria that is found everywhere. Recipes include milk (or potatoes), heat and time. A lot of time. It takes about 12 hours to make, a process Dawson is now very familiar with.

She recently spent a year studying the art of salt rising bread as part of the West Virginia Folklife Apprenticeship Program. She trained under experts Genevieve Bardwell and Susan Ray Brown, the two women who started Rising Creek Bakery in Pennsylvania, which is one of the last places people can buy salt rising bread today.

Although she grew up in Lost Creek, West Virginia, surrounded by salt rising bread, Dawson had never made it before this apprenticeship.

“Growing up I didn’t realize how special it was. I just thought it was something people had everywhere, just a type of bread,” Amy said. “But it wasn’t until I moved home in my 30’s that I realized it was only in this region and that you really couldn’t get it anymore.” 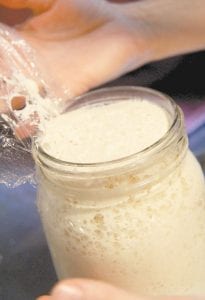 The sponge stage of the salt rising bread starter. Once the starter is in this stage one can mix it with flour to make a dough. (Photo by Caitlin Tan)

Dawson is also the baker and co-owner of Lost Creek Farm — a traveling farm-to-table kitchen that serves up traditional Appalachian cuisine.

She bakes salt rising bread in her old-farmhouse kitchen, which is perhaps the very same kitchen her ancestor’s baked in.

“My great-grandma Rachel Blake Dawson who grew up in this house made salt rising bread, and she probably learned it from her mom and so I bet a lot of salt rising bread was made in this very house,” she said.

A Twelve Hour Labor of Love

The simplest salt rising bread recipe is just flour and water. But the more ingredients, the more chance for bacteria to grow. So, Dawson hedges her bets.

For her starter, she mixes sliced potato, cornmeal, flour, baking soda and hot water in a quartsized mason jar. She covers it with plastic wrap and a jar ring. The bacteria need to breathe, so she pokes a hole in the plastic.

“All the recipes say the same thing,” she said. “You put it in a warm place. And then they don’t say anything else about it. But for this particular bacteria that creates the rise in salt rising bread and the fermentation, you need it between 104 and 110 degrees Fahrenheit.”

Traditionally, bakers kept their starters on or around their wood stoves.

“In pioneer days the women just knew their fires and knew where to put it overnight and that it would be the right temperature, and it’s amazing they figured it out because that’s a very narrow temperature range.”

Rather than a wood stove Dawson uses a sous vide for temperature accuracy. The sous vide is a curling iron shaped tool that keeps a pot of water at a set temperature.

She set her starters in the heated pot overnight and checks them after eight to 12 hours.

“You want this foam layer on top of your starter,” Amy said.

The starter looks almost white, with flecks of ingredients sitting at the bottom, then a liquid layer and on top, a foam.

“That shows you bacteria is working,” she said. “Those are the air bubbles from the bacteria. You want that that means fermentation is taking place.”

At this stage Dawson takes out the potato slices and adds about half a cup of flour to the starter, but there are no precise measurements. It should somewhat resemble a thin pancake batter.

She lets it sit once more in the heat for 30 minutes or until it has risen to the top of the jar. This is called the ‘sponge stage.’

Dawson says a starter can usually make up to 10 loaves and as little as one.

The starter has an interesting smell, one that has a polarizing reputation. It smells like a strong, aging cheese.

“I don’t want to say decomposing, but you can tell things are breaking down in there, and stuffs getting moving.”

Dawson says she has never heard of the bacteria hurting anyone; however, if the starter does not rise within 12 hours, it is best to throw it out.

To make the dough she mixes the sponge with a teaspoon of salt and a cup of flour per loaf, as well as a splash of hot water.

She kneads the dough and then lets it rise in bread pans in her oven at 104 degrees.

After rising a dough should double in size.

Dawson then heats the oven to 400 degrees and bakes the loaves for 30 minutes.

When all is said and done, the whole process is easily 12-to-15 hours. One begins to think, why not just buy bread from the store? Or just make a quicker bread with yeast? Amy had a good explanation.

“Because it would just be lost. Salt rising bread is such a unique thing. And all these recipes and food heritage, I think it’s really important to keep it — it’s what makes us West Virginian. It’s what makes us unique.”

But What’s With The Name?

The name, salt rising bread, is still a bit of a mystery. Dawson says her mentors Genevieve and Susan have one theory they explain in their book about the bread.

During an interview with another expert on the bread, Susan and Genevieve ask about saleratus — a precursor to baking soda.

“They asked her about ‘saleratus’ and she said oh, ‘salteritus.’ And they thought just the way she said it ‘salt-er-i-tus’.salt rising.”

That is just one of the several theories on the name.

The loaves come out of the oven and fill the kitchen with a warm, grainy smell. The loaves are a beautiful golden color.

It is best to let them cool before cutting into them.

So Dawson cuts into a loaf she made the night before and buttered the slices and put them on the stove top.

She recalls an early memory of her grandmother burning salt rising bread.

“She kept her butter in the fridge. I just remember her scraping cold butter over burnt salt rising bread. It smelled so good. She’s still around but when I accidentally burn some toast I think of her.”

Finally, we get to taste the bread.

It has a lovely, crunchy crust, and each bite makes itself known. Dawson describes it as a “stick to your teeth like chewiness.” It’s uniquely delicious.

Information from: WVPR-FM, www.wvpubcast.org/news. aspx. Distributed by The Associated Press.