How tourism is helping nearby town grow 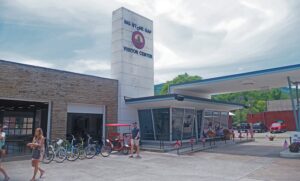 This former garage and service station now serves as a visitor center in downtown Big Stone Gap, Virginia, The town has been helped by its “ choice to embrace ecotourism and to support local entrepreneurs is transforming the local economy and providing residents with a sense of accomplishment and independence from the control of industry outsiders,” University of North Carolina study says.

Twenty years ago, Big Stone Gap, Virginia seemed to be fading away.

Coal mining was dying, and it was taking the town with it. Boarded up stores lined a large part of downtown, and the streets were largely deserted as residents went somewhere else to work and play.

But then the town made a decision. Tourism was easier to mine than coal, and Big Stone had potential.

Retired from the state Department of Mines, Mineral and Industry, O’Quinn said tourism is looking more and more like a good replacement. A week before, he said, there were people from 10 different states who stopped at the visitors center, many stopping in because Ashley Judd starred in a movie called Big Stone Gap and the visitors center is in an old gas station used as a location for that movie. But it’s more than just that, O’Quinn said, pointing out the new restaurants he called “the lifeblood of a small town” and the increase in traffic. 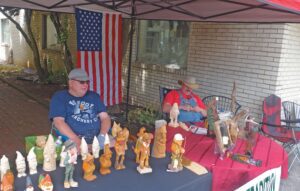 “I think Big Stone Gap is a good example of what these coal mining towns can do,” he said. “The other day I was driving though the first red light, and I counted 85 cars at the intersection”

Less than an hour away across the state line, the atmosphere in Big Stone is much the same as in Whitesburg, now. Restaurants and music venues are locating downtown, property owners are sprucing up their buildings and streets are blocked off some evenings and weekends while outdoor events and festivals are being held.

And like Whitesburg, there is a renewed interest and renewed vitality in the town.

“This town’s choice to embrace ecotourism and to support local entrepreneurs is transforming the local economy and providing residents with a sense of accomplishment and independence from the control of industry outsiders,” the report said.

The report started by identifying 150 towns of fewer than 10,000 people spread out from Oregon to south Georgia, and then pared that down to 35 towns that had been recognized either by word of mouth or in print as innovative communities with development controlled locally.

“The first step was to create a local education and training infrastructure to provide advice and encouragement to budding entrepreneurs. Phyllis Deel of Virginia Cooperative Extension offered workshops in the community to demonstrate how residents could start their own business and take control of their economic future. Deel also formed alliances with the Mountain Empire Community College and its Small Business Development Center. The center agreed to provide business plan feedback and financial advice to local entrepreneurs. Southwest Virginia Community Development Finance, a community development financial institution in nearby Abington, provided a lending option for ecotourism entrepreneurs in town. The town actively promoted these resources to local entrepreneurs and worked to connect the right resource to the right entrepreneur at the right time,” the report said.

“You have to have good leadership,” he said.

Whichever way you say it, the consensus is that it works.

A former coal miner, Eldridge said he doesn’t think coal will ever come back. He said the leadership to remake the economy in Big Stone Gap has come not only from the public officials, but from the people themselves. He pointed out a barbecue stand that was smoking pork down the street, and said he watched the owners of a nearby restaurant help the people who own the barbecue stand set up that morning. They didn’t view it as competition, but as a way to bring more people to town. Businesses regularly help each other, he said, and teach new entrepreneurs how to succeed.

The wood carving started as a hobby, but it turned into a loose knit group of people with like interests helping each other learn. That group has held a wood carving show for 10 years, skipping only last year because of the pandemic. Eldridge said they’ve been putting the word out on social media that they’ll be back this fall, and they’re confident they’ll have a crowd.

“This year, we’re going to gymnasium,” he said. “We’ll have people from all of the country.”