How Trump insurance changes could affect coverage next year 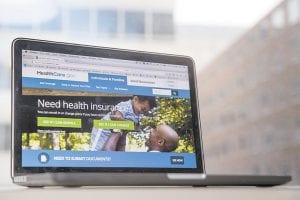 The HealthCare.gov website, where people can buy health insurance, is displayed on a laptop screen (AP Photo)

A much tighter sign-up deadline and coverage delays will be waiting for some health insurance customers now that President Donald Trump’s administration has finished a plan designed to stabilize shaky insurance markets.

Shoppers will have a shorter time period to choose a 2018 plan and a harder time enrolling outside that window if they lose a job or have some other special circumstance that affects their coverage. Insurers also will have more flexibility to design lowercost coverage under a set of changes announced for the Affordable Care Act’s insurance exchanges.

The exchanges, accessed by customers through the federal HealthCare.gov or state-run sites, were established as a way for people to compare and shop for insurance coverage. But insurers have raised prices sharply or abandoned markets in many regions, leaving some customers with little choice. Companies are considering leaving more markets for next year because they say they are losing money. The administration as responded with a series of changes aimed at reducing the number of insurance company defections while it pursues a broader remake of the By TOM MURPHY federal law.

These changes may help convince insurers to return to the market for next year, but they also could make shopping tougher for consumers in a few ways.

Customers will have 45 days to shop for 2018 coverage, starting Nov. 1 and ending Dec. 15. In previous years, they had twice that much time, and could still buy coverage until Jan. 31. The tighter time frame aims to prevent people from gaming the system by waiting until they become sick before signing up for coverage.

The smaller enrollment window could be tough on some shoppers because they often have to search for an insurance plan that includes their doctor to avoid big medical bills. That’s no quick task when a patient has several doctors, insurers are leaving exchanges, and those that remain have narrow doctor networks. Then shoppers have to figure out whether they can afford the coverage and if any tax credits are available to help.

“It’s a very delicate subject when you’re dealing with someone’s health and if the plan doesn’t work, you’re stuck with it for the next year,” said Dallas-based broker Tanya Boyd. “It’s not a five-minute conversation.”

The administration also placed curbs on “special enrollment periods” that allow consumers to sign up or change coverage outside the normal enrollment period if they have a big change in their life like a move, divorce or the birth of a child. Insurers say loose enforcement of these periods has been an expensive problem because it also allows people to game the system.

Customers will now have to verify first that they qualify for a special-enrollment period before they can enroll. That could create coverage delays.

“For some people, the hassle or difficulty in pulling together verification could discourage them from signing up altogether,” said Larry Levitt, a health insurance expert with the Kaiser Family Foundation, which studies health care issues.

The administration also gave insurers more flexibility to design lower-cost coverage that may attract younger and healthier customers, which would help insurers offset the higher cost of insuring older, less healthy people. That lowercost coverage could come with a higher deductible, though, which means those customers will need to pay more out of their own pockets for most care before the insurer starts paying.

Whether these changes help convince insurers to stick around for 2018 remains to be seen. They are weighing their options and may soon announce whether they plan to offer coverage for next year. But customers won’t know for sure for months, because insurers can still back out up to a few weeks before the start of the open enrollment period.

Insurers have called the changes — most of which they had requested — a step in the right direction. But a key concern has yet to be addressed.

Insurers, doctors, hospitals and the business community have asked the Trump administration to preserve “cost-sharing” subsidies that help reduce the impact of high deductibles and copayments for consumers with modest incomes. These are separate from the better-known so-called premium subsidies that most customers receive.

The cost-sharing subsidies, estimated at $7 billion year, have been challenged in a court case that’s now on hold. Without the payments, experts say, the government marketplaces that provide private insurance for about 12 million people will be overwhelmed by premium increases and insurer departures.

The Trump administration has indicated that the payments will continue as long as the case is being litigated, but insurers want more of an assurance that these subsidies will be available next year.

In a Wall Street Journal interview last week, Trump raised the possibility of shutting off the money if Democrats won’t bargain on health care. But the president also said he hasn’t made up his mind, and that he doesn’t want people to get hurt.

Most communities will have competing insurers on their public marketplaces next year, but a growing number will be down to one, and some areas may face having none.

Prices could climb another 10 percent or more next year due to higher medical expenses that affect coverage sold both on and off the public exchanges, according to Dave Dillion of the Society of Actuaries.