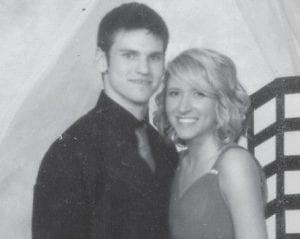 LINDSEY SHEPHERD, daughter of Wendy and Jerry Shepherd and granddaughter of Louise Shepherd and the late Castel Shepherd, is pictured with her escort at her high school prom.

Hello everyone, hope you are all doing well. Last week was busy. It was a good week. I met so many people. I was in the 20-mile yard sale from Sandlick to the Colson Fire Department. It was good seeing all the people and talking to them. Of course no one gets away without me finding out who they are and where they are from and their families. It was fun.

My sister Betty Tyree and her husband Bertus and I visited Clyde last Wednesday. He’s doing about the same. I really appreciate them going. Clyde gave Bertus a hat that day.

I visited Louise Joseph on Cowan last week. I love her house. Everett has sure done some pretty work. Louise was looking good and feeling better. I enjoyed my visit.

I also visited my sisterin law Blanch Hatton, wife of the late Loag Hatton, who is a resident at Letcher Manor. I didn’t know she was up there. She had been living in Pike County.

I enjoyed talking to Vivian Adams who is also a resident there. I talked to Katherine “Nannie” Frazier, and I looked in on Madge Combs who was sleeping. Lucinda Roberts was also sleeping. I guess they all like a nap after lunch.

It was nice talking to Kendall Isom and I saw his wife Carol Ann at Letcher Manor visiting.

Imogene and her husband Billy Eugene Fields stopped at my yard sale. It was good seeing them and also the three daughters of the late Zola and Kodel Gibson. They are old Marlowe friends.

If I keep naming names of everyone, I’ll have to go into overtime.

Ruby Combs called to tell me about her bus trip tour to Gatlinburg and Pigeon Forge. There were about 30 people who went, including Hiram Collins and Thelma Lewis and her sister Lavonna from Ohio. She said they went to Black Bear Jamboree and Comedy Barn and dancing in the street.

Betty and Bertus Tyree have gone to Beattyville to visit their family.

Hubert Howard and Joyce were having a big fish fry at Cram Creek Church Saturday evening. I was hoping to get to go.

Rob’s daughter Rocki and her husband Matt Hill and their baby Elise were to spend the weekend with Rob. Rob was excited about it. His son Dr. Kevin and wife Adrienne and their little boys Will and Loren were there last week. So Rob has been a happy camper. He loves his family so much!

Howard family, don’t forget our family reunion is Sept. 26 at Carr Creek Lake. Start planning on being there. I think family reunions are so important, especially since some of us are getting older.

I forgot to mention while we were at Pine Mountain Grill, Philip Little and his wife were there. Billy told Philip, “This is my mom.” He said, “Oh, I know, Annabell’s mommy.” I guess there could be a resemblance. She is cute and I call myself Mommy to her. Don’t tell anyone I said that.

I did get to go back up to the Ermine Center last week. It was good seeing all of them. They have large crowds there. That’s good. We need to keep in touch with our friends. I read once if you have one true friend, you are rich. If that’s true, I’m very rich! I really appreciate my friends everywhere and I try to keep in touch.

I’ve got a wedding coming up. Doretha and Ben Bentley’s daughter Andrea Bentley and Jonathan Fox are getting married on Saturday, August 8 (my mother’s birthday and also my brother John Howard’s) at Whitesburg First Baptist Church.

May God bless you. Try to be in church somewhere this week and try to visit the sick folks or at least call and say hello to them.