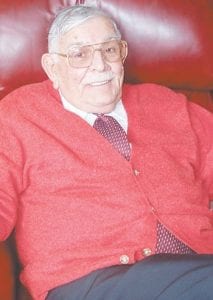 Hubert Hall of Sandlick, near Whitesburg in Letcher County, passed peacefully surrounded by family on the bright, sunny afternoon of April 25, 2016.

Hubert was born January 2, 1928, to Harve and Callie Adkins Hall on Rockhouse in Letcher County. He was the eldest of five children and was preceded in death by sisters Janice Hall (1940) and Eunice Mounts (2015). He is survived by brothers Ivan Hall (Shirley) of Lexington and Carl Hall (Anna) of Whitesburg.

On February 24, 1945, Hubert and his sweetheart, Bessie Lee Banks, drove a coal truck to be married. Their love persisted through sickness and health, joy and sorrow.

After Bessie’s death in 1989, Hubert enjoyed the company of his special companion, June Breeding. June’s son, Jamie Breeding, of Lexington, continued as a special part of Hubert’s life after his mother’s death.

During the coal boom of the 1970s, Hubert, his wife Bessie and his brother Carl built Hall Equipment & Supply Co. Hubert traveled throughout the coal- fields making friends and selling mining equipment and supplies. Through his success, what really brought Hubert the most joy was people. Hubert loved people. Whether talking politics over coffee with friends, hosting annual family reunions, watching his grandkids and great-grandkids open gifts at Christmas or lending a sympathetic and encouraging ear to someone in need, Hubert truly cherished and respected people. Knowing him meant loving people. Hubert actively engaged his community through the Whitesburg Masonic Lodge, the Mountain Shrine Club, local and state politics, and supporting youth sporting leagues. He is celebrated as a gentleman, an engaged citizen, a husband, a father and especially as an exceptional grandfather.

In lieu of flowers, the family asked that gifts be made to The Hubert & Bessie Hall Family Charitable Fund at www.presbyterianmissionexchange.org/hallfamilyfund or to the Mountain Shrine Club designated for the Children’s Hospital at P.O. Box 954, Whitesburg, KY, 41858.