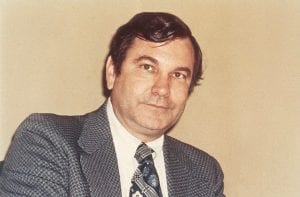 This December 1972 file photo shows Walter “Dee’’ Huddleston, the then Democratic Senator-elect from Kentucky. Huddleston, a former two-term U.S. senator whose political career was abruptly ended by Republican Mitch McConnell in 1984, has died. He was 92. Huddleston’s son, Steve, said his father died in his sleep early Tuesday in Warsaw, Ky. (AP Photo)

Walter Huddleston, a former two-term U.S. senator who lost his re-election bid in 1984 to Republican Mitch McConnell in one of Kentucky’s most storied and pivotal political campaigns, died Tuesday. He was 92.

The ex-senator died in his sleep at his son’s home in Warsaw, Kentucky, said his son, Steve Huddleston. He said his father embodied “the quintessential 20th century American story,” having lived through the Great Depression, fought in World War II and achieved a college education thanks to the GI Bill before rising to the highest levels of politics.

Huddleston served as a state senator in Kentucky from 1965 to 1972, when voters elevated him to the U.S. Senate. In the 1984 election, McConnell unseated him by just over 5,000 votes out of nearly 1.3 million votes cast. Mc- Connell, then the Jefferson County judge-executive in the state’s most populous county, was boosted by Republican President Ronald Reagan’s landslide re-election victory in Kentucky.

McConnell, now the Senate majority leader and Kentucky’s longest-serving U.S. senator, is regarded as the key architect of Republicans’ rise to dominance in the state. They hold all but one congressional seat, the governorship and both state legislative chambers.

On Tuesday, McConnell remembered his one-time foe as a “member of the Greatest Generation” who won the respect of his colleagues from Kentucky to Washington, D.C.

“When we each had the opportunity to share our visions for Kentucky’s future in 1984, I experienced Dee’s tenacity, competitiveness and skill firsthand,” McConnell said in a statement. “He was a tough competitor, and I always respected him for his service to our home state.”

Huddleston was put on the defensive during the campaign by a McConnell commercial of a bloodhound searching for the incumbent to claim he had a less-than-stellar Senate attendance record. Huddleston later said the ad was based on a “false premise,” but conceded he didn’t take it seriously enough and should have countered it.

“His objective is to win, period. And whatever it takes, he’ll do it,” Huddleston said of McConnell in a 2009 interview with the AP.

McConnell’s victory was a “major development” in the state GOP’s rise to dominance, said University of Kentucky political scientist Stephen Voss. McConnell’s attack ad was memorable and influential because it “showed a way to politicize job performance rather than issue positions,” he said.

After leaving the Senate, Huddleston spent decades as an executive at a Washington, D.C., consulting firm.

Huddleston never ran for elective office again after his defeat, his son said.

“He was a man of high intelligence and had a reasoned approach to life, and he conducted himself with great dignity and in a way that brought honor to himself throughout his lifetime,” his son said Tuesday.

The only Democrat now in Kentucky’s congressional delegation, U.S. Rep. John Yarmuth, remembered Huddleston as a “spirited politician” who “never quite enjoyed the combative side of politics.”

“Dee had an unmatched personality and a heart of gold,” Yarmuth said.

The son of a Methodist minister, Huddleston was born in Burkesville in Cumberland County on April 15, 1926. He was a standout high school basketball player, and then served as a tank gunner in World War II.

He went to college on the GI Bill, graduating from the University of Kentucky. (While at UK he joined the Pi Kappa Alpha fraternity in 1946 and was assigned as “little brother” to late Mountain Eagle editor and publisher Tom Gish.) Huddleston married his high school sweetheart and worked in radio until his election to the U.S. Senate. He spent much of his adult life in Elizabethtown, Kentucky.

Huddleston was elected to the U.S. Senate in 1972, defeating the state’s former GOP governor, Louie Nunn, and was re-elected in 1978.

In the Senate, Huddleston was a leading supporter of the tobacco price support program, then vital to Kentucky. He also supported the Panama Canal treaties, which cost him some support, said Raoul Cunningham, a civil-rights leader and former Huddleston staffer.

Huddleston also was “ahead of his times” on civilrights issues, Cunningham said Tuesday. Early in his Senate career, Huddleston hosted a Capitol reception for Kentucky native Muhammad Ali at a time when the boxing great and humanitarian was still a divisive figure in America, he said.