Huffman will be sentenced here on Jan. 18 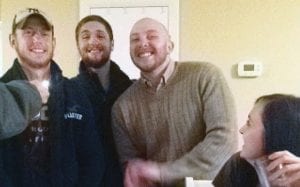 ABOUT A MONTH before he was murdered, Michael Hogg, second from left, enjoyed a meal with friends including Stacy Phillips, far left, and Travis Stephens. James R. Huffman IV was convicted in Letcher Circuit Court last week of stabbing Hogg to death and with attempting to murder Stephens and two others. Huffman, of Pike County, will be formally sentenced in Letcher Circuit Court on January 18.

James R. Huffman IV, convicted last week in the January 1, 2014, stabbing death of Michael Hogg, of Kingscreek, the attempted murder of three others, and the slashing of all four of their vehicle’s tires to prevent their escape, will be formally sentenced January 18.

A Letcher Circuit jury recommended Friday that Huffman, 38, of Pikeville, be sentenced to life in prison plus 45 years.

The jury deliberated for less than two hours before it handed the recommendation up to Special Letcher Circuit Judge Kent Hendrickson at 7:15 p.m. Friday after hearing about two hours of testimony in the sentencing phase of the trial.

Jury selection began December 4 and lasted three days, and jurors heard 10 days of testimony before closing arguments last Thursday evening. Before the closing, Hendrickson read jurors 49 pages of instructions that would have allowed them to find Huffman guilty of lesser charges, innocent because of intoxication, or innocent because of self-protection, if they believed the defense’s case. 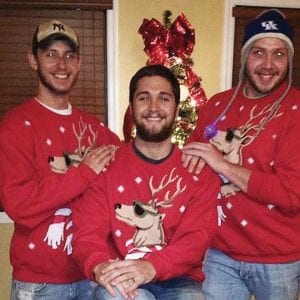 IN HAPPIER TIMES — A Letcher Circuit Court Jury was shown this photo of muder victim Michael Hogg of Kingscreek (right) and two of Hogg’s closest friends during the sentencing phase of the trial of James R. Huffman IV. Jurors had earlier convicted Huffman of murdering Hogg and attempting to murder Stacy Phillips (left) and two others. Pictured with Hogg and Phillips in this photo taken during a December 2013 dinner party was Travis Stephens. Hogg was stabbed to death January 1, 2014.

Attorneys for the defense and prosecution delivered closing arguments late Thursday after spending the better part of two days writing and rewriting the instructions. After they were read aloud by the judge, defense attorney Robert Wright took the podium to argue that Huffman was acting in self-defense when he stabbed Michael Hogg to death.

Wright acknowledged that his client should not have brought the Buck knife with a six-inch blade when he came to Whitesburg from Pike County that night, but placed the lion’s share of the blame for the stabbings on Hogg, a 24-year-old Eastern Kentucky University student who died in the passenger seat of his own Jeep on the way to the Whitesburg hospital. Wright also placed the blame for Huffman’s actions on Christopher Puckett and Stacy Phillips, two of Hogg’s friends who were also stabbed but survived.

He said there were three witnesses who all told somewhat similar but somewhat different versions of what happened that night on Hayes Street.

Everyone involved in the altercation that took place on Whitesburg’s Hayes Street was intoxicated, Wright said, and that was one of several bad decisions made that night.

Wright said Hogg, Puckett and Phillips had plenty of beer and other alcohol at the apartment of one of the women who was with them, but Hogg decided to return to StreetSide Bar and Grill, then located on Main Street, at 1:16 a.m. to confront Huffman over an $18 bottle of Fireball Cinnamon Whiskey, a 66-proof liqueur.

“Nothing good happens after midnight,” Wright said, telling jurors his father had always told him that.

Wright focused most of his case and his closing on a blue flannel shirt found neatly placed on top of a toboggan lying next to two trash cans, about 40 yards away from the scene of the stabbing.

The shirt had no knife holes and no blood on it, but buttons were ripped off and similar buttons were lying the street at the scene of the fight and stabbing. Wright speculated that it was Hogg’s shirt, and that he ripped it open in a rage and threw it on the ground, then placed it and his hat by the trash when, he said, Huff- man ran and Hogg and his friends chased him down.

Wright attempted to raise suspicions about the Commonwealth’s Attorney’s Office, telling jurors to think about why that shirt was left in evidence and not brought to the courtroom.

In his closing statement to jurors, Letcher Commonwealth’s Attorney Edison G. Banks II said that while Huffman claimed he was just defending himself, everything points to him as the aggressor. Huffman “didn’t have a mark on him,” Banks said. “He didn’t get stabbed, cut, have to go to the hospital. He didn’t have any holes in his clothes. His pants didn’t show he’d been down on the ground tussling around.”

No matter what Huffman says happened, Banks told the jury, he can’t explain away the knife. It was a collector knife that a friend of Huffman’s testified he had showed off on the trip to Whitesburg and told them it was like the knife used by the killer in the movie “Scream.”

“That Buck knife that he called just a knife, just an ordinary knife, he’d say. That knife had not only the blood of Michael Hogg on it, it had DNA from Stacy Phillips, Christopher Puckett, and oh, yeah, the defendant,” he said. “You can’t get out of that DNA.”

Banks mocked Wright’s shirt theory, saying it doesn’t make sense that Hogg would rip off his shirt, then place it neatly on top of his toboggan.

“I’m in a rage! I rip my shirt off … wait … I gotta go over here and lay it down,” Banks scoffed, pantomiming ripping a shirt open and then folding it.

Banks said it was the first case he has ever had in which he had three eyewitnesses that survived an attack, but he said that almost wasn’t the case. The knife wound in Puckett’s back came within one centimeter of resulting in a second death at the hands of Huff- man. The wound was in nearly the same location as that fatal wound in Hogg’s back.

Phillips received a large cut to his hand, Banks said, as he tried to stop Huffman from stabbing his friend.

Banks also mocked testimony Huffman gave to the jury on Tuesday and Wednesday. Banks had questioned him about a video that shows him hopping up on a planter and walking near the edge of the sidewalk despite Huffman having testified that he was so drunk he could not remember most of the events of New Year’s Eve.

Banks also questioned Huffman’s assertion that he was afraid Puckett and Phillips would return and kill him, and didn’t call 9-1-1 because he wasn’t familiar with his cellular phone.

Huffman, Banks said, was familiar enough with the phone to place and receive more than 60 calls in five days, download a Google Earth map after the stabbing, and “Google” the rock band Foddershock, which he and two of his friends, including co-defendant Patrick Smith, saw perform at nearby Summit City before the killing.

Banks added that while Huffman claimed he was too drunk to work the new phone properly, he made numerous calls to his parents and “texted” them GPS coordinates on where they could pick him up in downtown Whitesburg.

It became apparent jurors weren’t buying either of Huffman’s defenses just two hours after deliberations began Friday morning, when they returned to court to question whether the instructions at the bottom of the verdict form for complicity to attempted murder of Puckett were correct. The first instruction, which jurors would have had to follow had they found Huffman innocent, was correct. The second instruction, which they would have had to follow if they had found him guilty, was not.

Two hours later, 15 minutes after the jury finished lunch, they returned with a verdict — guilty on all five counts of the indictment.

Still scheduled to stand trial in connection with the murder and attempted murders is Smith who, like Huff- man, is from Pike County. Smith is also charged with complicity in the five crimes.

Many family members and friends of Hogg and his family broke into tears both after the guilty verdict was returned and also during the emotional testimony delivered by Don Hogg, the victim’s father, and surviving victims Puckett, of Jenkins, and Phillips, of Thornton.

Huffman’s father reacted to the guilty verdict by telling a sheriff ’s deputy, “That’s what the appeals courts are for.”

Huffman’s younger brother, Joshua, a former drug addict who is now a successful minister and business owner, testified on his behalf in the sentencing phase of the trial, telling jurors that he believes James Huffman IV could find redemption if the jury recommended a lighter prison term. Joshua Huff- man told the jury he found redemption after being sentenced to a one-year term in federal prison when he was 19.

Defense attorney Steve Owen, who represented Joshua Huffman in his federal trail and represented James Huffman in at least one previous case, asked jurors in his closing argument in the sentencing phase to consider that anyone can have redemption, and urged them not to follow the Old Testament teaching of an eye for an eye and a tooth for a tooth.

Banks, however, said no one is “entitled” to redemption.

“Redemption has to be earned,” Banks told the jury.

If the judge accepts the jury’s recommendation at the sentencing hearing next month, Huffman will not be eligible for parole until he is 89 years old.